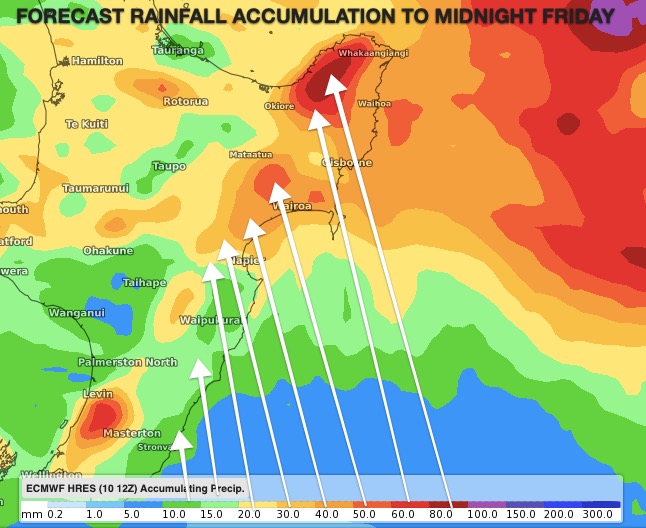 A cold southerly is on the way and it’s expected to bring some rain relief into the dry eastern North Island in the days ahead, along with a 10 degree temperature drop in daytime highs.

While not all will get the rain relief they need, some in northern Hawke’s Bay could get a nice soaking event which spreads up to Gisborne, East Cape and into eastern Bay of Plenty.

Napier and Hastings are on the cusp of the rainfall but potentially some of the better forecast rainfall numbers seen there in a while.

As the southerly moves in it will linger around the north eastern North Island before drifting eastwards. If it drifts eastwards earlier the rainfall totals will reduce – so do keep an eye on them as they might change. But if the front lingers longer then rainfall totals may even lift up from what is forecast.

www.RuralWeather.co.nz may have more helpful details in your local area. We don’t want to give false hope for those who need it, there are a few uncertainties with this set up so keep up to date with your local forecast. Our forecast rainfall totals are updated every single hour.

A few showers will make it into dry parts of Northland too – but higher air pressure in the north will likely limit the rainfall totals. Still, a few helpful showers will be moving through in the days ahead, possibly a heavy downpour or two as well.