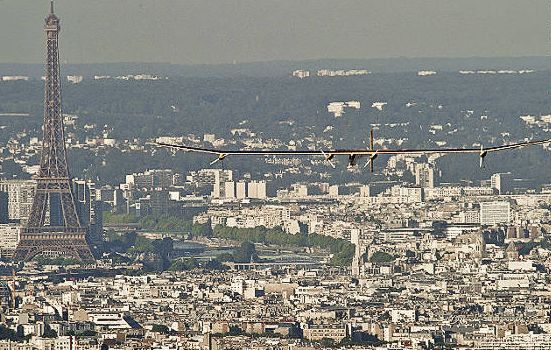 With the wingspan of a jumbo jet and a scooter-sized engine, the Solar Impulse is a one of a kind.

Thanks to nearly 12,000 solar cells and four electrically-powered propellers, it’s the first aircraft in the world that can fly without any fuel — day or night.

“We want to show what can be done with these technologies,” Borschberg said.

“We can keep our quality of life but reduce our energy consumptions, reduce our dependency on oil and nuclear energy.”

The idea for Solar Impulse came from Bertrand Piccard, the first man to travel non-stop around the world in a balloon.

“We almost failed (because of) lack of fuel,” Piccard said of his epic journey back in 1999.

“At that moment, I made a promise that the next time I would fly around the world it would be with no fuel at all. And that’s how the vision of solar impulse was born,” he said.

But it wasn’t until he met Borschberg seven years ago that he began to fulfill that promise.

With a budget of $134 million at their disposal, the Solar Impulse team have the sponsors and the support to realize their goal of flying around the world without fuel in 2014 — a first in aviation history.

“Everything we do is new. Each time it’s a pioneering step,” Piccard said.

“When the Wright Brothers did that first flight in 1903, it took 25 years for Charles Lindbergh to cross the Atlantic. He did it alone. (It then took) another 25 years to have 100 passengers flying over the Atlantic.”

With fair winds behind them, Piccard and Borschberg are confident that the future of solar flying is bright and that Solar Impulse will soar into the record books, securing their place in aviation history as 21st century pioneers of flight.