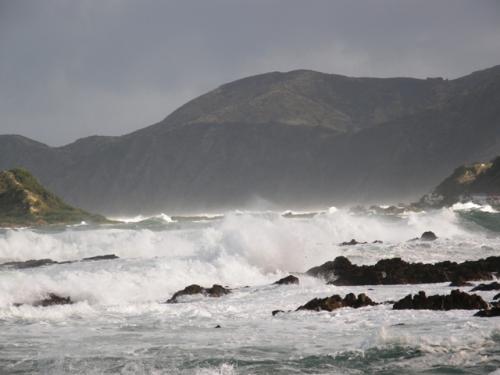 The snow storm that is spreading across the northern mountains of the South Island, and later tonight Central Plateau, will be much faster moving than last weeks storm says WeatherWatch.co.nz.

Head weather analyst Philip Duncan says while the low itself is larger it is going to move away from New Zealand quite quickly on Saturday.  “The low at the start of this week hugged the northern and eastern coastlines of the North Island for at least three days.  The low affecting the country today and tonight won’t be anywhere near New Zealand in another 30 hours”.

Mr Duncan says a warm front passed over the North Island today and temperatures are steady in the mid teens for most however a cold southerly this morning brought snow to 100 metres across Canterbury and that southerly has this afternoon reached the lower North Island.

As of 4pm the southerly was mixing with the warm moist northern air south of about Wanganui.  Temperatures are single digits around Wellington and parts of Taranaki.

The temperature difference between north and south was made clear after WeatherWatch released today’s Daily Highs.  The national high of 20 degrees was recorded in Whangarei while Molesworth and Culverden in the South Island reached only 2 degrees.

Snow is not yet falling on the Desert Road or Napier-Taupo highway but Mr Duncan believes it will later tonight.  “The southerly will spread north after dark so we’re advising motorists travelling those routes to leave as early as possible.  If you can’t leave early then simply have an alternate route planned in case of road closures”.

WeatherWatch.co.nz says because the system is faster moving snow amounts won’t be as high as last Sunday and Monday.  “While the weather pattern is similar to last week the speed of it isn’t – hopefully this won’t cause as many travel headaches or loss of stock for farmers” says Mr Duncan.