Snow falls in Wellington, could Auckland be next? 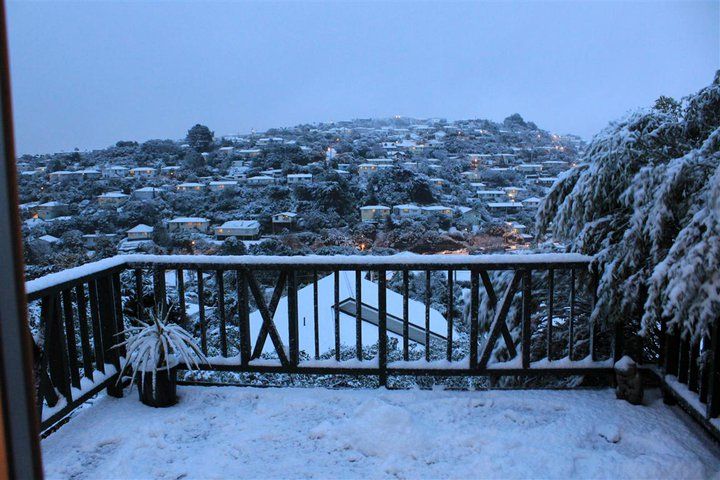 WeatherWatch.co.nz is receiving numerous reports of snow falling, and settling, in some parts of Wellington city this afternoon.

The latest surge of cold air has also brought snow into parts of Canterbury but, for the most part, Christchurch has been sheltered from the snow – but that is going to change as winds shift more south to south east on Monday.

Meanwhile WeatherWatch.co.nz says their latest forecast for Auckland is extremely rare as the Antarctic blast moves up the country.

The weather news authority expects snow showers down to 200 metres later on Monday and overnight into Tuesday.

This is 100 metres lower than July’s snow event – which was also extremely rare.
This would see snow falling and possibly settling on the tops of the Waitakere and Hunua ranges and right across the Coromandel Peninsula.

State Highway One over the Bombay Hills shouldn’t be affected, at a height of 186m, however WeatherWatch.co.nz can’t rule out the chance of a few snow flakes falling during showers – but not settling.
Hail will be more of a danger for Auckland motorists, along with squally winds gusting over 100km/h at times.

Across the city showers, some heavy with hail, will pick up on Monday afternoon and overnight with sleet possible right down to sea level in isolated pockets.

WeatherWatch.co.nz says the city should reach 10 degrees C on Monday and possibly only 9 on Tuesday.

Where’s my forecast?  Currently we only provide forecasts for Auckland however later in spring WeatherWatch.co.nz will be launching forecasts for a further 17 main centres.

I’m trying to find information about when was the last time it really snowed like this in Wellington.  Can you tell me?   On the news they talked about 1995 having a coating on some hills in Wellington, but this is all the way down to Plimmerton beach.  It’s pretty amazing and wanted to let the kids know at school tomorrow what the real facts are.

Not sure of the date sorry, but MetService said yesterday it was 50 years I believe

yeah auckland did had a little bit snow in there tho .. i saw it while i was at school. it was awesome to seen them in real snow 🙂

My partner just txt to say its snowing in East Tamaki. It’s landing on him but not settling on the ground cos of the rain. Wicked though!

Snowed in Marton ! Still on the groung , about 2 inches .

Wow, thanks for the info-keep warm! WW

Can’t help laughing at these two today. Imagine the calls, “but what do I tell the farmers and the press? How long will they believe the crap we have been telling them? My face glows red every time I repeat the same BS! Snow at sea level in Wellington? Possibility of snow in Auckland? How do I explain the snow in Johannesburg, coldest in over 31 years? Why isn’t warming? Can you give me some “adjusted weather station temperatures to feed to gullible journo’s? How do I explain the cold weather killing all the baby lambs?