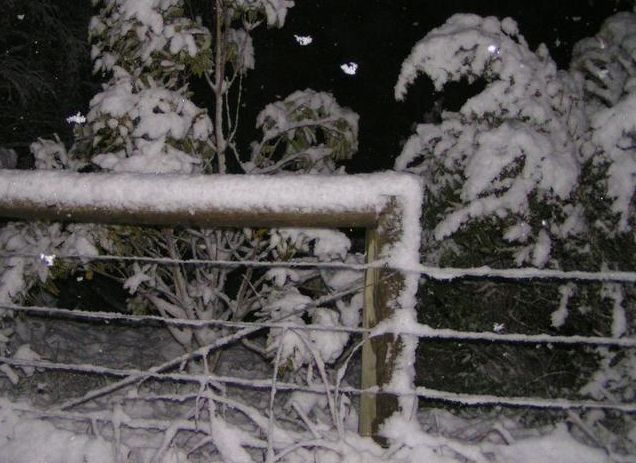 The Antarctic blast sweeping up New Zealand is bringing heavy snow to the Nelson region, Dunedin and Christchurch with a sleety snow/rain mix falling a few times on Sunday night in downtown Wellington.

Several WeatherWatch.co.nz readers from Nelson, Motueka and Mapua are reporting snow flakes falling this evening and a handful of reports have come in from around Wellington saying snow is falling to sea level but not settling.

Snow in the Nelson region to near sea level is extremely rare due to the blocking nature of the ranges around the area.

Readers wrote to WeatherWatch.co.nz doubting it was really snow – but several photos have confirmed the snow via our Facebook page and Winter Photo Gallery.

“Yes its snowing in Motueka .. and up in harleys road just above us now we are on the coast not here yet .. but now just this minute becoming sleety .. how exciting” Aly told WeatherWatch.co.nz.

While Christine told us “I have lived in Mapua, Nelson for over 30 years and I have never seen it snow. We have snow fall in between the rain drops. It’s amazing. My brother lives in Upper Moutere, Nelson and has 2 foot of snow on his deck. We didn’t expect this”.

Earlier in the evening WeatherWatch.co.nz exclusively predicted light snow was likely to fall to sea level around Wellington.

“With snow falling to sea level from Southland to Nelson it’s not out of the question that the same will happen in Wellington and the very lower North Island in the coming hours” said head weather analyst Philip Duncan.  He said snow may be heavy enough to settle overnight in the higher suburbs of Wellington.

Earlier in the evening Meghann Sherwood told us “Its snowing in Kelburn, Wellington!”.

On Friday WeatherWatch.co.nz predicted snow to fall in rare places and says light snow or a snow/rain mix may affect other centres overnight such as Palmerston North, Eketahuna and Stratford.  Sleet is possible in surrounding towns such as Masterton, Wanganui and Hawera.

WeatherWatch.co.nz says the snow reports coming in today are extremely rare and many people are commenting about how long it’s been since snow fell to such low levels.

Further south and Christchurch residents are reporting heavier snowfall now with it settling in many areas.

But despite the snow across the South Island not all centres are getting it.  Many comments to WeatherWatch.co.nz show that places like Timaru and Ashburton appear to have missed a large portion of the snow.

In saying that, latest satellite maps indicate at least another 12 hours before the snow showers are expected to taper off south of Christchurch so the risk remains for the area – with snow warnings still in force by Metservice.

The southerly in Christchurch has picked up this evening with the temperature dropping to near freezing as the Antarctic surge heads northwards.

Snow flurries should start to ease in coastal Southland tonight but may intensify in other eastern parts of the South Island, especially inland Canterbury and up into Marlborough.

Dunedin Airport has cancelled all flights due to the snow and ice according to their website but Christchurch airport is open for business.

The cold air is starting to move into the upper South Island now but Wellington, despite having a cold southerly, is yet to feel the coldest air – which should arrive later tonight.

A large low over the North Island is starting to move away to the east which will allow the cold change to advance northwards.

In Auckland south westerlies have picked up and is nearing gale force in exposed areas – it will continue to strengthen overnight along with heavy showers, some with hail.

WeatherWatch.co.nz believes heavy snow isn’t likely in most main centres, with the exception of Christchurch and Dunedin.

Have photos of the wintry blast?  Upload them easily here

WeatherWatch.co.nz has received dozens of reports on our Facebook page of snow falling to sea level, or near sea level, right across the South Island from Invercargill to Dunedin, Christchurch to Greymouth and Hokitika.

WeatherWatch.co.nz says light snow on the West Coast is simply spillover from the heavy snow along the Southern Alps.

WeatherWatch.co.nz says much of the South Island is now under the grip of the Antarctic blast with the coldest air now settling into Christchurch over the next few hours.

The polar air will then move into Wellington and the lower North Island after dark this evening.

“We still don’t expect major snowfalls in the main centres but we do expect snow flurries to settle in Christchurch and other eastern centres of the South Island, especially later this afternoon and into this evening” says head weather analyst Philip Duncan.

“This isn’t the snow storm of the century…but what makes this system different from previous cold blasts is the low snow level, which is sea level across much of southern and eastern South Island and to very low levels right across the lower North Island.  This is a rare national event” says Mr Duncan.

Heavy snow in Queenstown caused major traffic problems this morning and is continuing to do so this afternoon with numerous roads being closed or affected by heavy snow.  Conditions are likely to be worse overnight.

Earlier in the day conditions were described as “blizzard like” in Queenstown by one WeatherWatch.co.nz reader, Peter Murray.  “The roads are a no go here in Queenstown people are struggling up the roads” he wrote on our Facebook page this morning.

WeatherWatch.co.nz says as the cold air heads north it will interact with the mild, moist, conditions over the North Island thanks to a large sub-tropical low.

WeatherWatch.co.nz says combined it could create even heavier snow in the North Island and central parts of New Zealand..

“It’s not out of the question that brief snow flurries may fall in parts of Wellington and Taupo with a snow/rain mix overnight in Palmerston North and Masterton”.

Mr Duncan says snow was very likely as far north as the Coromandel Peninsula.  “I’d expect a dusting of snow on Monday across the Coromandel peaks and on Mt Te Aroha in the Eastern Waikato”.

WeatherWatch.co.nz’s independent Auckland forecasts are also calling for snow on the Hunua Ranges during Monday and on the very peaks of the Waitakere Ranges.  Snow may settle on the Hunua ranges but if any does fall on the Waitakere’s it is expected to melt fairly quickly.

“Our focus is mostly on the rareness of snow falling to such low levels rather than predicting heavy snow for the main centres”.

Winter wonderland – although as this farmer points out, it’s not welcome for them / Sharon Templeton, Manapouri

Has it snowed at your place today?  Let us know below!

Whangaparaoa has clear blue skies but at 4.30 we had hail but that stopped after 10 mins

Do you know if the road to christchurch from Dunedin will open today?

Non event here in Fairlie. Blue skies and sunshine with no snow. Air flow way too SW I thought it was supposed to be SSE.

Non event here in Fairlie. Blue skies and sunshine with no snow. Air flow way too SW I thought it was supposed to be SSE.

It has been snowing heavily in Queenstown and still snowing.. my property in Dalefield is snowed in.

Lots of snow here in Parklands. Christchurch, about 20cm deep. Looks so lovely, and still snowing

it is lightly snowing in inglewood this morninig at 6am

I thought we would have had snow tonight but it has passed us by. I am not complaining, it’s cold enough without snow.