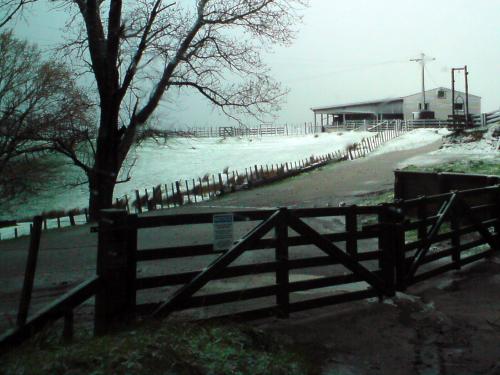 A completely unseasonable dumping of snow across the lower North Island yesterday has surprised WeatherWatch.co.nz forecasters with some places receiving snow which would be considered rare even for the middle of winter.

Snow fell just 5 minutes from Palmerston North with temperatures hovering at just 3 degrees for much of the afternoon along with heavy rain.

Snow also fell in Dannevirke, Woodville and around Waipukurau.

Some regions around southern Hawkes Bay/northern Wairarapa spent much of the afternoon around zero degrees.

Heavy rain also caused surface flooding further north in Waikato and Auckland.  The rain was so heavy it cut off satellite services for TV and Radio for a time.

In parts of the South Island too, Hanmer Springs, Springfield, Oxford etc.
Must lower than the forecast 500m for Canterbury, it was even sleeting/hailing from 6pm last night in Christchurch.
Heavy rain over night in the early hours between 4-6am but wind driven so my gauge isnt reading correctly with it being horizontal.
Ive talked to a few people in Canterbury who have also noticed the dust from aussie, so its also made its way down over the South Island.

We didn’t get snow here in Auckland but did anyone else notice the thick dust over the windscreen this morning? Hope it clears tonight for a spectacular sunset!