Home > News > Slow-mo low making a show across the Nor... 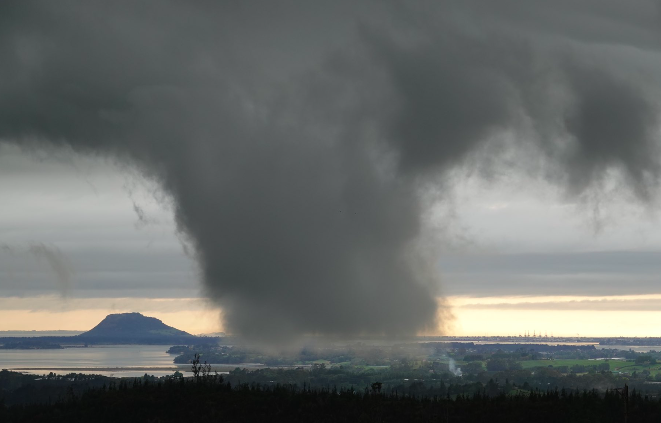 Updated 6:22pm — A very slow moving low pressure system currently lies over Great Barrier Island and northern Coromandel Peninsula and is drifting eastwards towards the Bay of Plenty marine area. By Wednesday night it will be around East Cape and by Thursday morning it will fall apart east of the North Island as a high rolls into NZ.

The low is pulling down sub-tropical winds but also merging with the colder southerly blowing up the rest of the nation.

Winds are converging over Auckland City producing isolated downpours – although as of 5:35pm no repeat of the thunderstorms the city had on Monday afternoon. “Yesterday the low was to the west of Auckland so the region and city had a warmer northerly flow. Today the low is out over Great Barrier Island meaning the city is now getting the cooler southerly flow” says WeatherWatch.co.nz head forecaster Philip Duncan. One thunderstorm occurred at 4pm in the city.

Meanwhile the eastern North Island is still caught up in the northerly flow, prompting more big downpours and thunderstorms moving into Hawke’s Bay from the north. Mostly inland.