Sleepless in the North – and perhaps again tonight 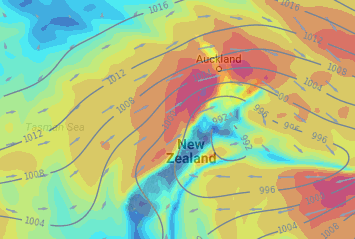 Blustery winds kept some Aucklanders awake last night, along with other northern regions, as the nor’west winds behind 36 hours of nonstop rain move in.

Winds increased quickly late last night and peaked in the early hours of the morning, before easing back a bit around dawn…as people were typically ‘waking up’ for the day.

In Auckland winds have picked back up again as daylight has returned and once again these winds are likely to surge back up again towards evening.

This means Aucklanders and other Northerners may have yet another restless or broken sleep tonight as blustery winds, up to gale force, blow in from the north west then turn more west to south west overnight.

On Saturday AM blustery west to south west winds will affect many North Island regions and some coastal parts of the south.

But hey, at least tomorrow is Saturday right?

The good news is Saturday Night looks calmer and quieter (weatherwise!) across the nation.

Have a wonderful weekend  🙂