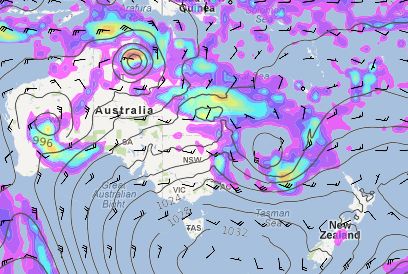 Major Aussie rainstorms are set to return this week across northern regions thanks to at least three tropical lows – one of which is likely to become a tropical cyclone – and WeatherWatch.co.nz says the rain will do its best to head towards New Zealand too.

The incoming rain for already soaked parts of Australia is likely to cause more flooding issues with the risk extending from Darwin across Queensland and parts of New South Wales.

WeatherWatch.co.nz says this weekend a new low will form in the Tasman Sea and will deepen into a significant low and will have some connections to the big rainmakers in Australia and the sub-tropics.

Its natural path will be to take it towards New Zealand early next week – in between a high to our south west and another to our east.

A few models show a high chance of at least a couple of days of heavy rain – while others show a 60% chance of rain or showers next week in the upper and western North Island, coupled with building nor’easters.

Either way, the weather next week looks significantly different to this week.

The models do also indicate a significant surge in tropical activity – as we continue through what is traditionally the peak of the cyclone season.

WeatherWatch.co.nz predicts the heavy rain forecast for northern and eastern Australia will also move into the Pacific Islands to our north and north west over the coming 10 days.

Click here to see our interactive rain maps – and zoom out to see Australia, the Pacific Islands too

According to the models it looks a bit of precipitation Sun/Mon over northland and Auckland.