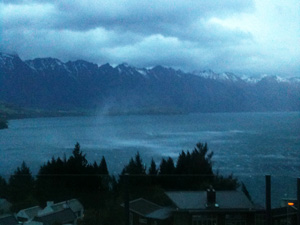 Much of the North Island is set to feel the effects of the incoming storm overnight and the top of the South Island isn’t expected to miss out either.

Nelson, Marlborough, Kaikoura and parts of North Canterbury are likely to have to tackle some wild weather but the tail end of this system should only flick Christchurch and nothing very much out of the ordinary is expected there.

“It looks as if it’ll be a wet start in the morning for Cantabs here but skies should improve throughout the day but the wind will be chilly as it comes in from the south and sport is likely to be a casualty in the morning” says WeatherWatch.co.nz weather analyst Richard Green.
“More importantly this nasty weather is likely to strike the top 2 provinces of the South Island overnight and tomorrow morning plus Kaikoura as well” Green says.

WeatherWatch.co.nz believes rain will be pretty heavy for a time for these regions over the next 12-18 hours but the wind could also be quite fierce in exposed areas as it roars in from the south and sou’ east.

This rapidly deepening depression isn’t likely to hang around for very long but a short, sharp swipe is expected.

Image of a disturbance on Lake Wakatipu, Queenstown

I’m going to stick my neck out here a bit and suggest that 150km SE’s in Nelson/Marlborough is a little OTT. Given the speed of the system much of the Easterly power will be diminished. There’ll still be widespread rain and heavy for a time from Nelson City east. I would expect gusts up to 100km for much of the upper south before turning SSW gusting to much the same speed for the bulk of Saturday.

We don’t get much SE in Nelson and when we do it’s generally from slow moving systems.

150km is more likely around New Plymouth, Gissy and Hawkes Bay. Probably Wellington too but then Welly is a little more used to it.