Shuttle & Space Station to pass over NZ for final time 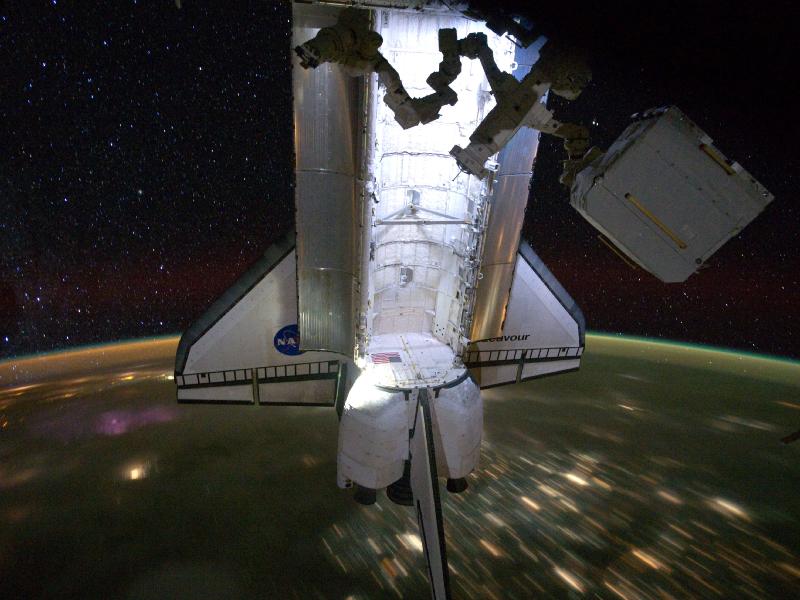 NASA’s current historic and final shuttle mission can be viewed from the skies over New Zealand with it near the International Space Station – a great idea to show the kids before the shuttle returns to earth for good on Thursday night NZT.

This question was sent in to us yesterday by WeatherWatch.co.nz reader Craig Armstrong:

Hi was just wanting to know what the chances of clear skies would be for Wednesday and Thursday night here in Hamilton. I want to see the ISS and  Space Shuttle passing over head.

The shuttle will land on Thursday night NZ time 21:57. so will be on its second to last orbit of earth when it pass over head. Should be very bright. -3.4 magnitude.

Hi Craig – thanks for the information!  The forecast for Wednesday calls for thick clouds building across northern NZ but hopefully not until later in the evening.  However the distant building clouds could be an issue for lower angle viewing.  Clearest skies will be in the east and inland areas of both islands.

On Thursday there could be a lot of rain cloud over the North Island and starting to push clouds into the South Island.  However rain should ease in the north by the end of the day – fingers crossed there’s a gap in the cloud for you to view it then from Hamilton.

When’s the Space Station coming over your house?  Check with NASA here

Got a brilliant view of both last night with the Shuttle leading by about a minute and a half.
Note that if you look at the time quoted in the initial post above you will actually miss the shuttle which is expected to be leading the ISS by about 5 minutes tonight. It should appear at about 5:54 p.m but would pay to watch a little bit early. (Thanks for the tip about the Planetarium software, not sure though whether it will have up to date enough orbital elements for the shuttle.)
There is a brief pass in the West at 7:30 p.m but you will need to be quick and careful as the shuttle enters the earth’s shadow after about 4 minutes. These are our last opportunities EVER to see a shuttle, if things go according to plan the deorbit burn will take place at 8:49 p.m with landing at Kennedy Space Center at 9:56 p.m. The only (remote) chance we would have of seeing it again would be if for any reason there was a day’s delay in deorbiting.

Had a call from a friend who thought we may be interested, what a bonus to Bobs 87th birthday party. Weather conditions perfect for viewing at Tora on the eastern coast settlement of the South Wairarapa, New Zealand, Clear skies gave us an extended view.

The ISS was probably about 30 seconds behind the Space Shuttle Atlantis.

We watched the shuttle Atlantis pass over at approx 7.00 pm tonight (Weds) to be followed by the international space station approx two minutes later. Due to partial cloud our viewing time for each was limited to about 10 to 12 seconds. We are in Manukau /Auckland. Truly amazing sight ….

Just saw it over here in Kaukapakapa just through the cloud break, this yellow bright light coming from the SW.

Just saw it quite clearly right over the top of our house in Rangiora. Amazing.

we also saw it tuesday evening from our home in helensville. very bright, lost sight of it behind cloud. Said to my son well you won’t see that again. Kinda sad really.

I have good news for the people from Papamoa – the pass you saw fits perfectly with a pass of the International Space Station docked to the Shuttle. You were probably (one of) the last people in the world ever to see a Shuttle docked to the Station: undocking occurred at 6:28 p.m our time as they were still passing near us but unfortunately they were invisible by then owing to the earth’s shadow.
The orange colouring is consistent with many sightings of the ISS (including some of mine!) and appears to be the result of the coloration of the solar panels.