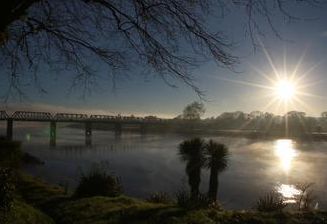 Police are warning users of the Whanganui River to beware of a shark that has been spotted swimming up the river.

Acting Sergeant Michael Roycroft from Whanganui Central police said a number of people had seen the shark, including himself.

“We saw a dorsal fin which we believe belongs to a shark. It’s probably a metre to a metre-and-a-half long.”

Mr Roycroft said he had never heard of sharks being seen in the river before.

“Hopefully at the turn of the tide it will make its way back downstream.”

Homepage image : Dublin St bridge over Whanganui River, near where a shark has been spotted. Photo / Wanganui Chronicle

I remember seeing a fin like a shark when I was small probably about 35 years ago near the aramoho railway bridge,it moved up against the current, and no debris was present ie logs etc which occur in flooding periods,Also the rivers been cleaned in recent years so,Also kahawai could be used to be caught that far up too.