Home > News > Severe Storm to suddenly form as it reac...

Severe Storm to suddenly form as it reaches NZ on Thursday, then weakens (+12 Maps) 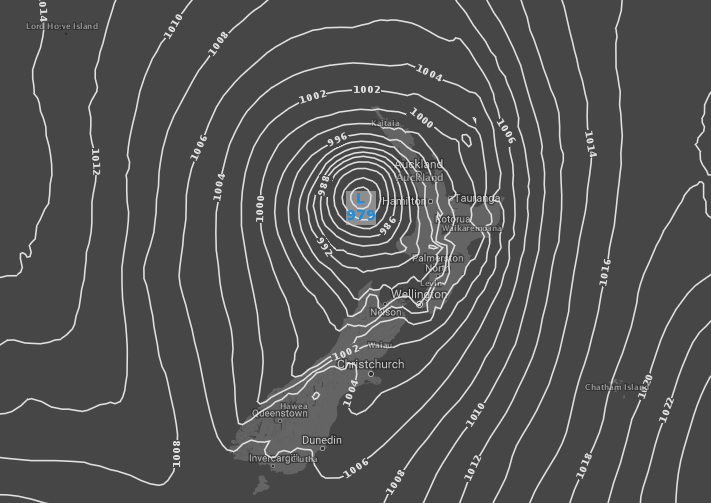 EXTENSIVE REPORT – UPDATED: A low is today forming offshore from Brisbane and is heading towards New Zealand, rapidly deepening, intensifying and reaching our shores by Thursday PM, air pressure down to 976hPa or maybe lower by early Friday morning.

While it may be severe for a time it may also be short lived and is likely to bring a burst of rough weather to some areas plus relief for some regions needing rain.

WeatherWatch.co.nz says campers and trampers need to be aware of this low which could produce very heavy rain in New Zealand, strong to gale force winds for a time and dangerous sea and beach conditions – in particular around parts of the North Island.

A humid northerly flow will continue today over the North Island with daytime heating leading to large cloud build ups and isolated torrential downpours with thunderstorms. This energy shifts further into the South Island on Thursday. Localised downpours could produce over 50mm of rain in just a few hours. Localised flooding is possible.

On Thursday this quickly deepening low in the Tasman Sea will bring rain into the upper North Island with isolated heavy falls, especially later in the day.

On Friday the low crosses New Zealand and clears the country during Saturday.

It’s likely severe weather warnings will be issued – those near streams and low lying coastal areas (due to storm surge) should be prepared to move to higher ground should this low produce flooding rains, which is possible in some spots – especially after such a long dry end to spring and start to summer.

As well as the low bringing rough weather to land it’s likely to cause very dangerous marine conditions with waves up to 7 metres high and strong rips affecting both western and eastern coastlines of the North Island especially – this may cause coastal flooding due to storm surge.

RAPIDLY FORMING LOW – BUT WILL IT BE A ‘WEATHER BOMB’?
The air pressure with this low is going to rapidly drop. In a 24 hour period this low may drop near than 20hPa (hectopascals) – which is a lot.

At this stage it looks like the forecast storm will fail to technically reach the levels of Bombogenesis – better known as a “Weather Bomb”. For this low to be allowed to be called a “weather bomb” the central air pressure must drop by at least 24hPa in 24 hours and at this stage it looks like it may fail to do this. However it will be fairly close – so it’s still possible.

European and American modelling is quite similar on the depth, intensity and rapid deepening of this low, showing it falling into the mid to low 970hPa range early on Friday morning when it’s likely to be peaking in strength just to the west of the North Island. It should then weaken as it crosses land and over to the Pacific Ocean.

NOT ALL WILL GET STRONG WINDS/STORM CONDITIONS
These lows are a bit tricky to forecast as they form so quickly then fade away quite fast. However previous lows like this have brought rain, but not always wind to all. Those in tents will find half of gale force (around 30km/h) very windy and potentially damaging. However for most others these winds aren’t going to cause serious issues. When you get to gale force (around 60km/h) camping becomes horrible but again for most others it’s just a windy day often without too many issues – perhaps a few power cuts. The only areas likely to see severe gales will be right near the centre and this may only affect a few pockets of the country. Sometimes with a rapidly forming low it may not be until a few hours out that we can lock in the highest risk areas for potential wind damage. It’s important to note that near the centre of this low damaging winds are possible, but not too far from the centre damaging winds are less likely. Some areas may only have normal winds and a bit of rain – but with so many people outdoors we must cover all the risks for severe weather, even if only in pockets of the country.

RAIN PROBABLY THE MAIN FOCUS
As forecasters we’re trying to manage all the various weather risks with this low, but probably the most widespread and significant feature about this incoming low is the chance of heavy rain and even flooding. This forecast will be positive news to many farmers, gardeners and growers though. The best set up for rain to absorb into the ground after such a dry period before is for drizzle or light rain to dampen the surface first. If the rain is too heavy too fast it will increase the chances of flooding – and this is a possibility. Cracks in the ground may also make slips possible in hilly areas. 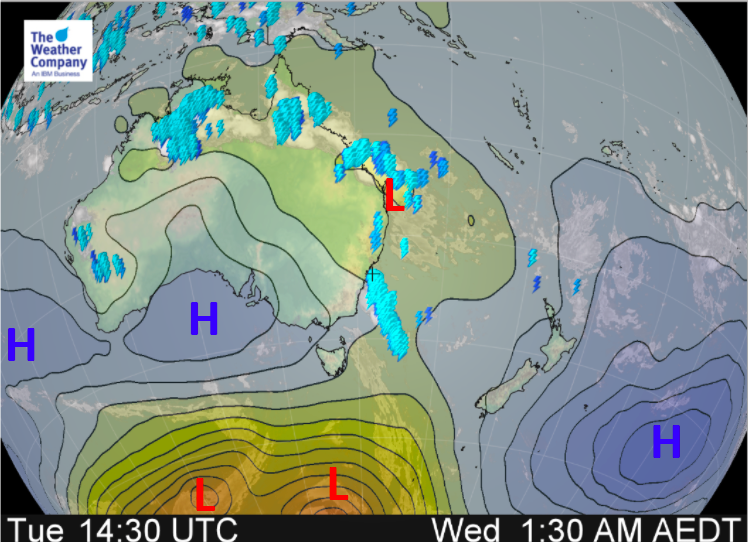 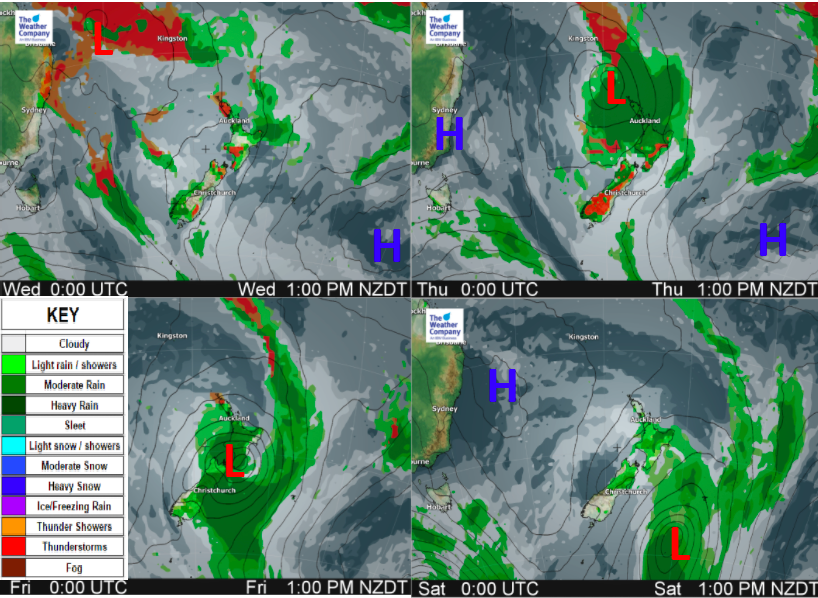 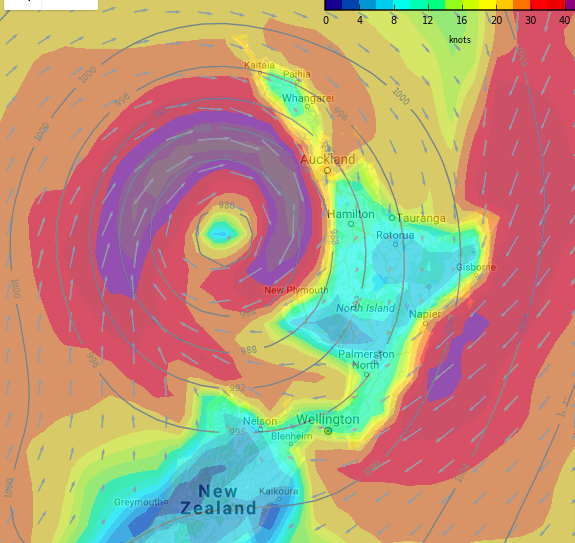 4am Friday: The storm is expected to peak early morning Friday. This wind map above highlights how the worst of the winds are mainly out at sea, but may become hurricane force (120km/h) for a time near the centre. Whether this severely impacts land in NZ is unclear yet but we do expect gales (just over 60km/h) for many exposed areas for a time. Forecast wind speed map by Weathermap. 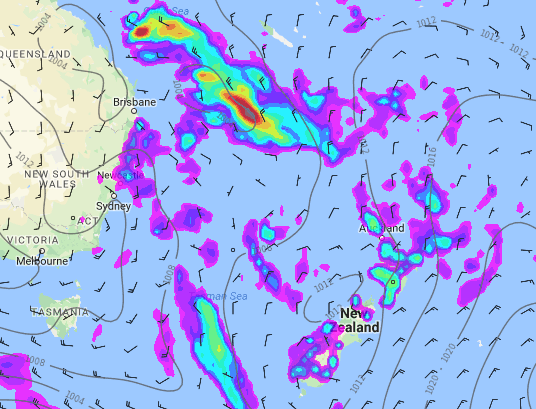 4pm Wednesday shows heavy downpours around New Zealand (especially the North Island) some with thunder, due to daytime heating plus the more humid northerly flow building over the country. 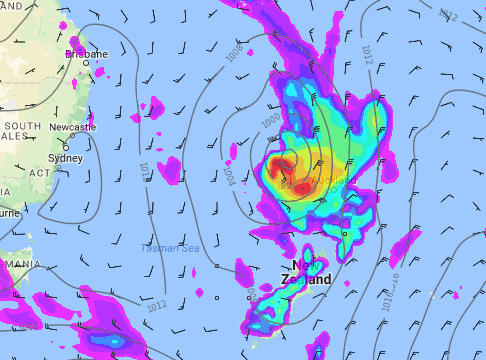 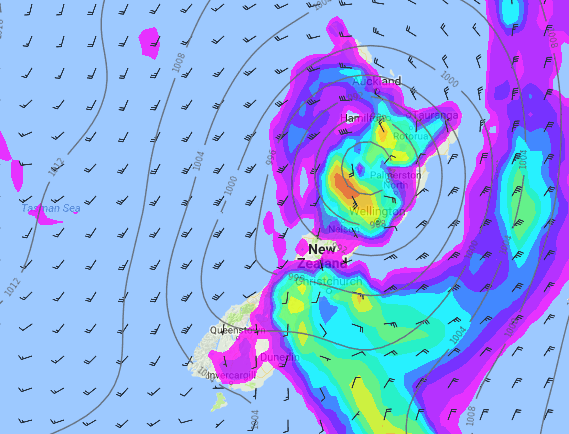 4pm Friday and the storm has peaked by now and should be weakening a bit due to NZ’s landmass. 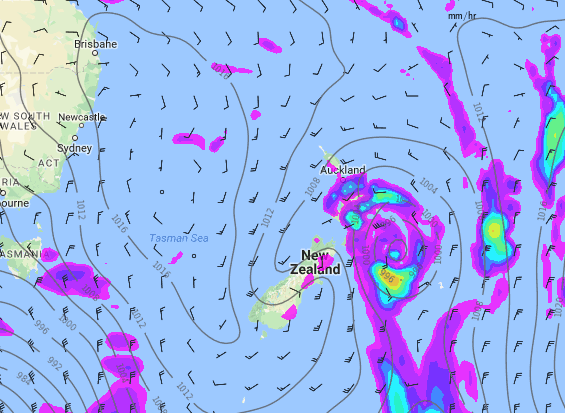 4pm Saturday and the deep low is weakening and moving away slowly – as a large high moves in from the Tasman Sea pushing the low offshore. Forecast Rain Radar maps by Weathermap. 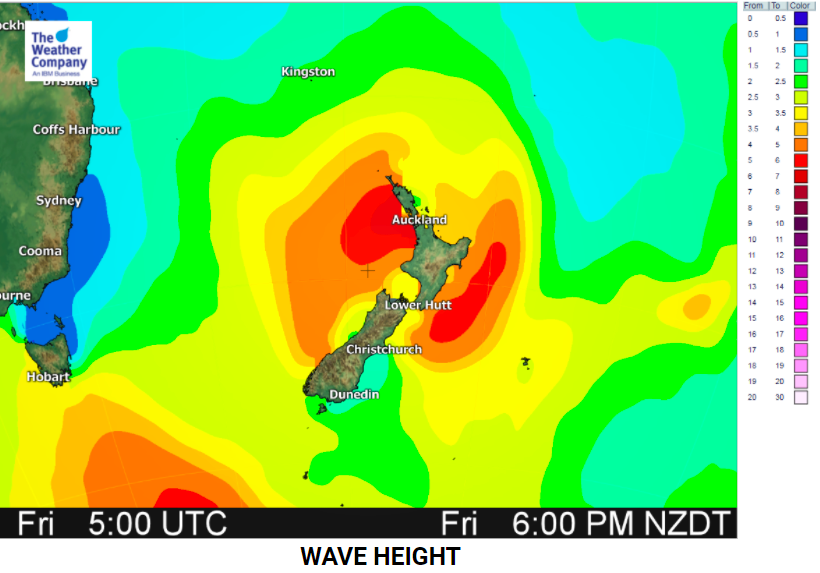 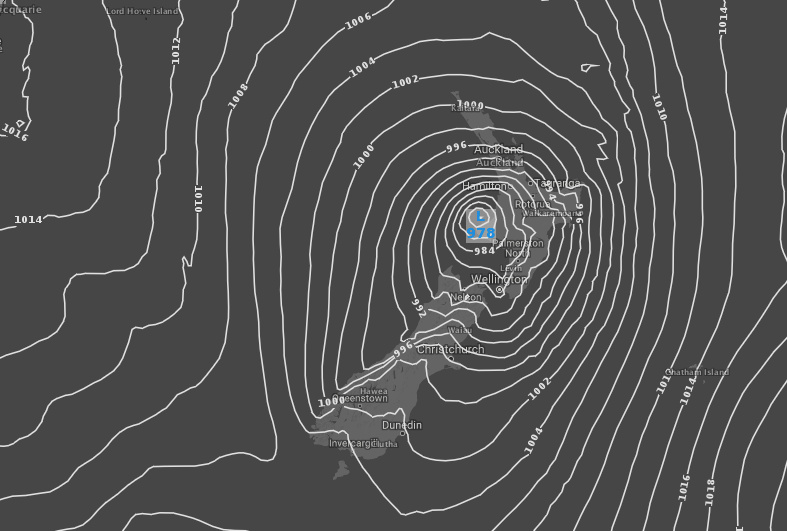 What a fantastic summary of risks and terminology. I hope the reporters and internet news people read it!
It’s unusually fast moving for the time of year but looks like causing a bit of grief with holiday makers. Still, all you can do is warn people.

Could do with one of Phil’s excellent videos about this.

Knew about this weather event last week LOL. Thanks for finally talking about it.

Many thanks for your coverage of the approaching storm. It’s very much appreciated. We can now make informed decisions in light of the weather possibilities. We will keep up to date with your website as your team tracks the storm and puts out more information. Thank you.