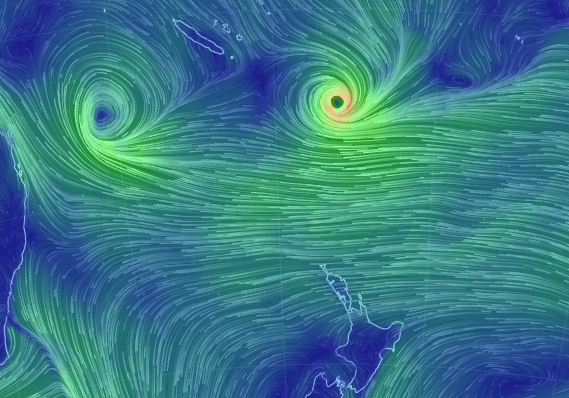 The centre of Severe Cyclone Winston will be closest to New Zealand today before swinging back north and returning towards the tropics tomorrow.

Today the centre of Winston is about the length of the North or South Island away from Cape Reinga to the north – roughly 1000kms.

As of Sunday morning Winston was still a Severe Category 4 cyclone with winds sustained at 175km/h and gusting to 215km/h. 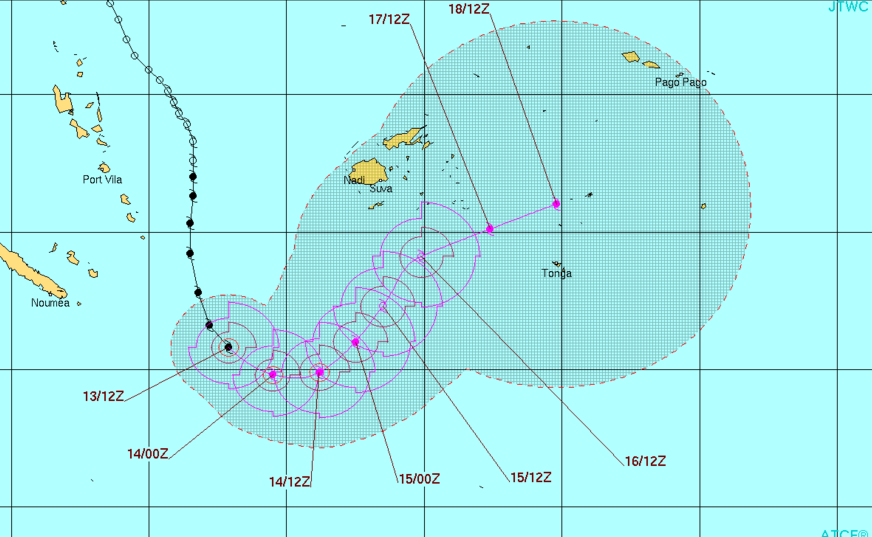 Due to a very big high east of New Zealand (the main reason Winston can’t make a direct hit with the North Island) Cyclone Winston will tonight stop it’s SE track and instead turn NE. This is somewhat unusual however cyclones tend to look for the path of least resistance and this may now put Fiji, Tonga and a few other island nations on alert in the coming week.

With a severe cyclone fairly close to the North Island we can expect dangerous beach conditions to develop this week in the Far North, Northland and possibly as far south as northern Auckland, Coromandel and western Bay of Plenty.  Those heading to the beach should use common sense and be aware of the offshore storm churning up larger swells from the north or north east and stronger currents and rips (which can be harder to detect).  Those around rocks should also be aware offshore storms like this generate random larger waves every now and then. 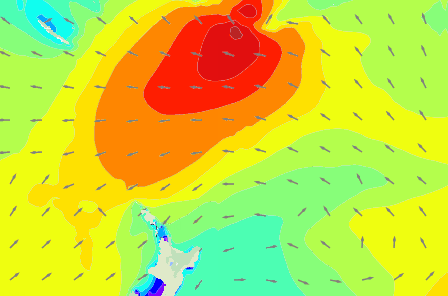 Meanwhile Tatiana is no longer a tropical cyclone as of today. The remnants of the low will remain in the Coral Sea this week.

Which brings us to the actual severe weather risk for New Zealand – which will be created by a low coming out of the Southern Ocean and South Tasman Sea – and will then help pull down the tropical, moisture rich air left over by both cyclones to our north.  This combination of humid air and cold southerly air will see some heavy, slow moving, downpours this coming week over both islands of New Zealand.

While this new low is quite large in size it is not what we consider a storm – but it may produce some localised stormy weather in the form of heavy rain and some strong winds. There’s also a chance of a few thunderstorms. 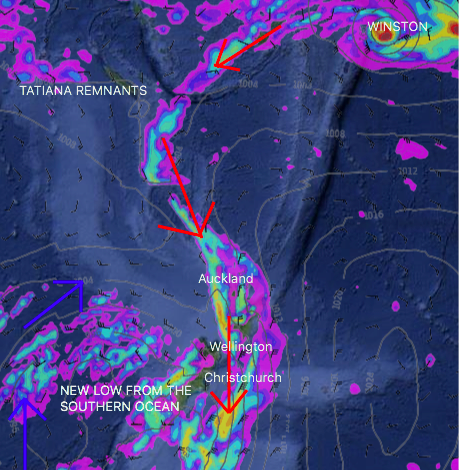 The set up for Thursday shows how this low taps into the tropical air.

WeatherWatch.co.nz says this low, tapping into the tropical air to our north, may well generate severe weather warnings in New Zealand – and MetService agrees with high to moderate confidence of heavy rain in the west of both islands and low risk, at this stage, of gales in the east of central New Zealand towards the middle of this coming week.

Neither Winston or the remnants of Tatiana will directly hit New Zealand.

As for Winston’s future – Tonga lies directly in the path of this storm, and Winston may have two attempts at going near Tonga, firstly around the middle of this week then again next Saturday.  There is still a long way to go though – and this tracking may well change, as we’ve seen in the past week – however the island nation will be concerned with the current forecast track. 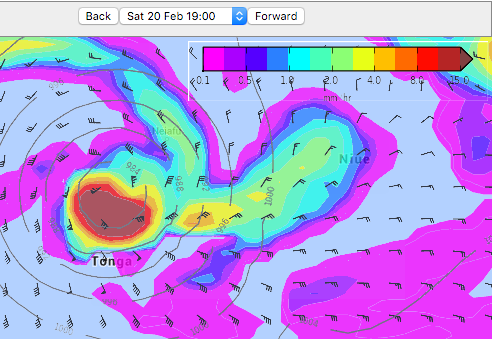 Rain and wind map for next Saturday shows Winston directly over Tonga.  This is the GFS model.

Winston may remain north east of New Zealand for another 10 days.

WeatherWatch.co.nz head weather analyst Philip Duncan says he does not rule out another cyclone north of New Zealand this season due to lower air pressure to the north and very warm conditions both in the sea and air.