Several days of low pressure coming, so when is NZ’s next big high? 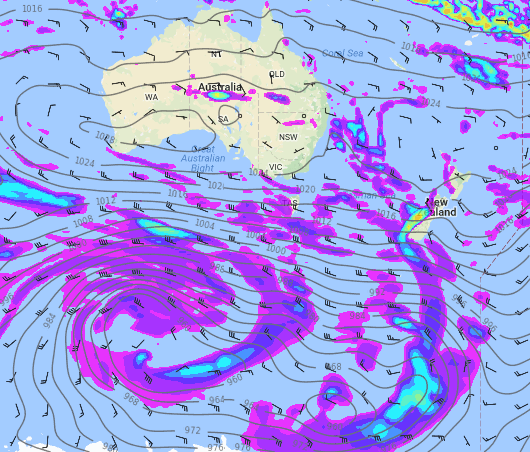 New Zealand is wet at the moment with most people wanting drier than average weather this month – unfortunately the stream of low pressure about to move in will keep the wet weather coming.

On Wednesday a large high well north of New Zealand and another one well south of us will briefly connect over the nation to bring a fairly calm, settled day.

However by Thursday a large area of low pressure drifts in from the Tasman Sea bringing rain and showers to many regions.

This may impact the America’s Cup parade on Thursday in Auckland with latest data suggesting a 65 to 70% chance of wet weather (in the form of showers).  Of course Auckland’s layout means these showers may be out at sea or rural areas rather than the city centre – we can’t really lock this in until later on Wednesday or maybe even on Thursday itself due to the slow moving nature of this system.

Once this low arrives on Thursday it hangs around until next week with areas of low pressure bringing in showers to the country, especially western areas.

WHEN IS THE NEXT BIG HIGH?!
We’re getting asked this more and more – the next big high looks like one from southern Australia which should arrive in northern New Zealand later next week. However it may only affect the upper North Island, bringing in westerlies for everyone else. This could be positive for many though – bringing drier weather to the east of both islands (which are wetter than they should be in a number of areas). It would also likely encourage more rain makers into the Southern Alps and the hydro electric dams.

It’s unclear when the next nationwide high pressure system might be but the high expected later in July for northerners may be a large one that stretches back across Australia and fuels further westerlies for much of New Zealand.

– Image / Next Thursday July 13th shows a very large high stretching from west of Pert to east of Auckland, also encouraging a wall of westerlies in the Southern Ocean and over the South Island.