Home > News > Settled weather but frosty for some...

Settled weather but frosty for some 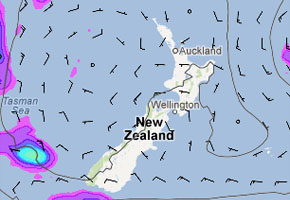 As mentioned yesterday we will be settled for most of this week due to anticyclonic weather, a weak front moves up the east coast of both Island during Thursday however and this will bring a bit of damp weather. The front will also bring some snow flurries to 600 perhaps 500m for eastern parts of the South Island and to 700m for the east coast of the North Island as it moves through. Accumulations won’t be large and due to this not much may settle but could be a nice little top up for ski fields mainly in the south.

The main point of mention will be potentially frosty conditions developing during the nights, this could be of some concern to growers however frosts won’t be too harsh. Tonight is a good candidate for light frosts in sheltered areas of the North Island mainly inland. There is a risk of a light frost about Blenheim and inland parts of Canterbury and Otago early tomorrow morning however temperatures may just teeter on the verge getting down to 1 or 2 degrees, 0 or –1 can’t be ruled out in inland Canterbury and Otago.

Come Thursday morning the front mentioned above will bring cloud so some areas are likely to remain frost free, although Central Otago may see cloud breaking just before dawn and could see temperatures plummet so it is a time to watch. A frost risk also presents itself in inland sheltered areas of the North Island for early Thursday morning.

Friday and Saturday mornings signal possible frosts for many areas especially inland, there is a chance cloud left over from the front on Thursday may continue to affect eastern coastlines so could prevent temperatures dropping too far.