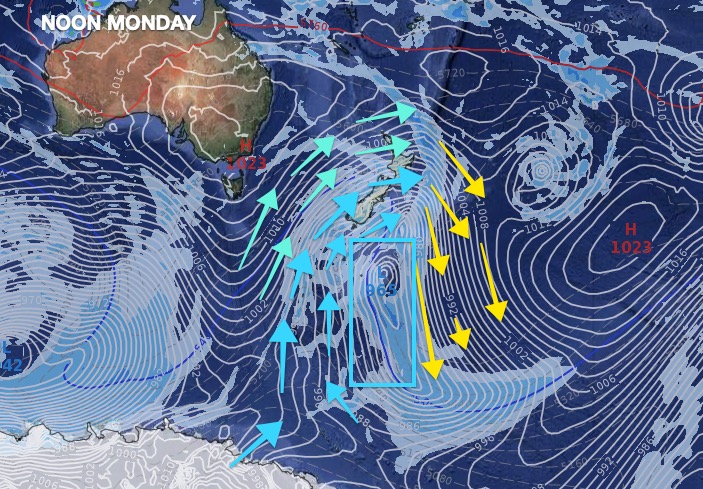 The weather is about to go downhill – but Saturday looks pleasant for many.

Low pressure is rapidly deepening over then next 24 hours and after a week of computer models flip flopping much more than usual they appear to be settling for what they originally forecast – a deep Southern Ocean storm that will brush NZ.

The low itself won’t directly cross NZ – although this was briefly in the forecast on Thursday with many computer models picking a Tasman Sea centred low. Low pressure may brush the southern part of NZ as this large and complicated low grows.

The area of low pressure south of NZ is expected to become about the same size as Australia by early next week.

Sunday sees winds increasing and gales developing in some coastal or exposed places.

Monday looks windiest with the chance of gusts over 100km/h in some places. There is the chance of a few isolated power cuts and perhaps a few trees down in some central or eastern areas. Refer to MetService for any wind warnings.

Tuesday is windy for the lower eastern South Island in particular and colder/cooler in most NZ regions. Winds ease as the day goes on for northern areas.

NOT JUST WIND – WINTRY WEATHER FOR SOME TOO:
Monday will also see a cold, wintry, change pounce on the South Island with a significant cooling down. For example on Sunday the daytime high in Gore, Southland, will be 20 degrees. On Monday the high is 8.

Queenstown may only be in the mid single digits, with a current high of 6 degrees forecast for both Monday and Tuesday. Even if a couple degrees warmer it’s still likely to be a single digit high.

Dunedin is also likely to see highs tumble by about 10 degrees from Sunday to Monday.

BORDERLINE STORM
For the most part this remains a borderline event – this means while it’s not currently forecast to be a major storm it does have the potential to have pockets of severe winds on Monday, heavy snow in the mountains and biting wind chills further south.

Due to the stay home order people should be prepared, even mentally, for the chance of possible interruptions to power supply or even internet and phone in some places.

whens the north island going to get its own low I am sick of all these lows favouring the south island that wasn’t the case in the past….the niwa climate maps say that it even sent the cyclones down south by passing the north island WTF

It’s rain we need in the north island please