Scorching start to 2014 in Australia 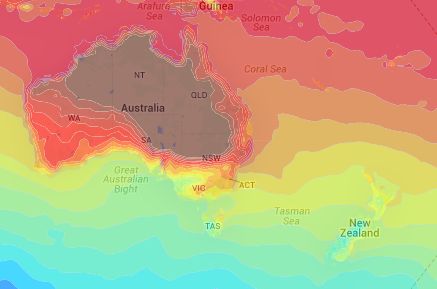 2014 will begin very hot over parts of Australia, as a band of intense heat sweeps across the nation putting records in serious danger with temperatures likely to near 50 degrees in parts.

The focus of the heat on New Years Day will be over the country’s interior with temperatures likely to push into the mid-to-high 40s.

Coober Pedy in South Australia’s Northwest Pastoral is forecast to hit a sizzling 48 degrees, and if it is reached, will be a record for any time of the year. Roxby Downs is also set for a high of 48 degrees, while Oodnadatta can expect 49 degrees. A bit further south, Leigh Creek should soar to a high of 46 degrees, which will put the record of 46.3 degrees set 25 years ago in danger.

Today, the heat will shift a little further east. Birdsville in western Queensland is forecast to reach a toasty 48 degrees, while Moomba in northeastern SA may experience even hotter temperatures, with the town’s record of 49.5 degrees at risk of being challenged. Alice Springs is predicted to reach 43 degrees, however there is the risk it could get even hotter with the town’s record of 45.2 degrees in danger.

By Friday, the most intense air mass will be centred over northern New South Wales and western QLD. Anywhere from Mount Isa to Longreach to Charleville to Moree to Narrabri and possibly Dubbo are likely to sizzle in temperatures in the mid 40s. Windorah in QLD is set to reach 47 degrees, just shy of its record of 47.6 degrees, while Bourke and Walgett in northwest NSW can expect to soar to 47 degrees.

On Saturday, the air mass will begin to break down a little. However, intense heat will still be experienced across much of QLD, with only the southwest and far north likely to escape. It will likely be the hottest day Brisbane has seen in more than half a decade with it expected to soar to 39 degrees in the city. Western suburbs will be even hotter, with some parts possibly seeing their hottest day in almost two decades with a forecast of 43 degrees.

From Sunday, a high pressure ridge will contract the scorching conditions to far northwestern QLD. However, some parts could see their longest stretch of heat on record, with Longreach on track to see nine consecutive days of 43 degrees.

Thankfully, there is some good news on the horizon with most models suggesting cooler conditions from early next week. There are even increasing indications that rain could affect large parts of QLD, which would be welcomed with open arms with many parts of the state struggling in drought

Sounds like normal weather for this time of year in Aussie.