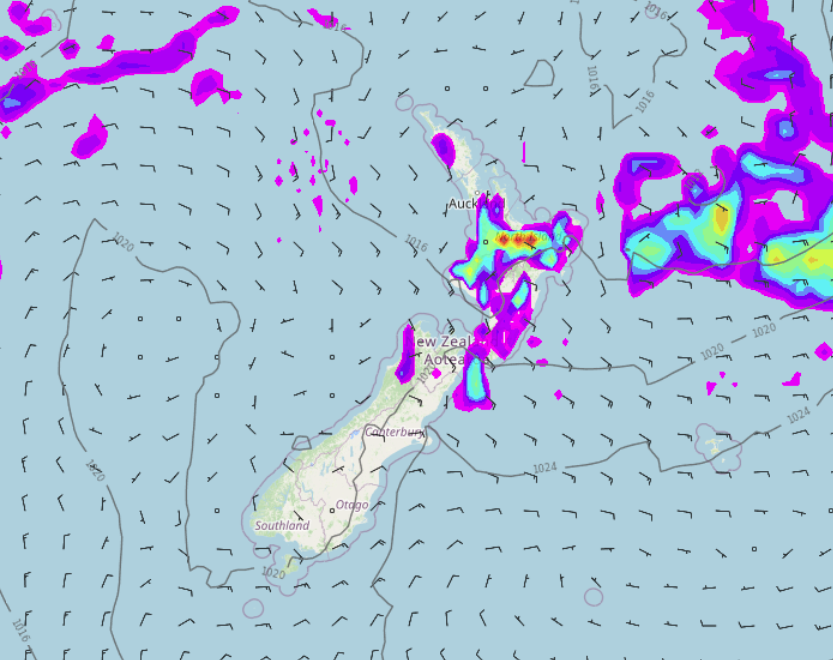 Becoming unstable for some parts of the western / upper North Island this afternoon, rain at times still feeding into the east coast. The South Island is mainly settled with high pressure but there may be some cloud about especially in the east.

Northland, Auckland, Waikato & Bay Of Plenty
Morning sunny spells, isolated showers develop in the afternoon, some may become heavy with thunder especially south Auckland into the Waikato and across to the Bay Of Plenty then clearing later on. Light winds.
Highs: 21-22

Western North Island (including Central North Island)
Cloudy areas, a few spits or showers especially morning and about the eastern ranges the rest of the day. Northern Taranaki may have a few afternoon sunny spells and an isolated shower or two. Southeasterly winds, fresh about the coast.
Highs: 16-22

Canterbury
Morning low cloud or fog breaks to sunny spells, cloud may thicken again in the evening about the coast. Northern parts of North Canterbury skies are quite cloudy for most of the day. A warm afternoon for the Mackenzie Basin. East to northeasterly winds, breezy across the plains.
Highs: 14-21

Southland & Otago
Chance of morning low cloud or fog then expect mostly sunny weather with some high cloud. Lower level cloud moves back into coastal Otago in the evening. Easterly quarter winds, breezy about coastal Otago and the Catlins.
Highs: 16-23

The weather forecast for Auckland since last few days has been very inaccurate, I wonder why that’s happening?

HI there, it’s due to a large area of low pressure stuck over northern NZ. If you watch Phil’s latest weather video he specifically talks about Auckland and the upper North Island and why some are getting rain/thunder forecasts when it’s dry, maybe sunny. Right conditions for downpours and thunder, but they won’t be forming in every part of northern NZ.