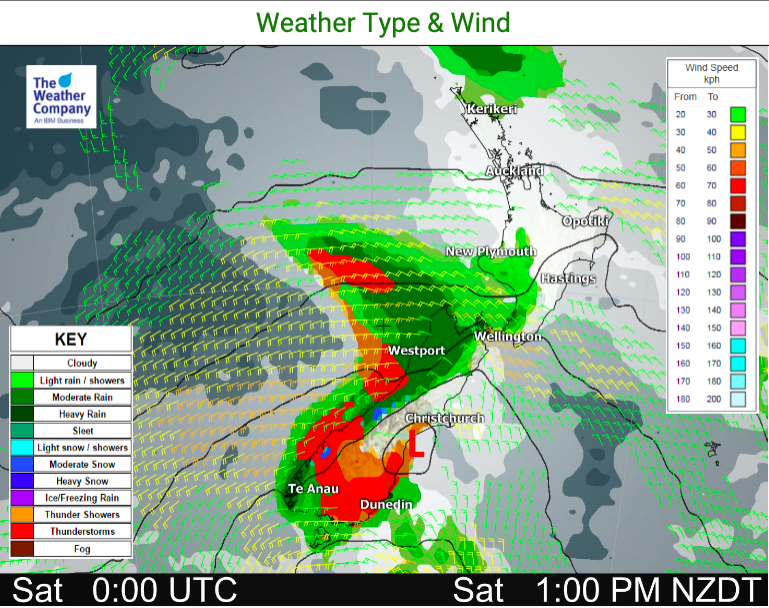 There is some end in sight to these “annoying” westerlies, within about six days we expect high pressure to move into the country bringing lighter winds for next weekend – and a shift to La Nina easterlies back in the north of NZ.

However for today it’s more of those westerlies, windy through Cook Strait and Wellington.

Rain slides up the West Coast today with a few heavy falls. Some patchy rain and showers for Southland. Due to the south west change there may be a couple of isolated thunderstorms in these regions.

Later today this front moves into the North Island and falls apart. It also brings some wet weather into parts of Otago and Canterbury later as the (brief) south west change moves in.

Northland, Auckland, Waikato & Bay Of Plenty
A mix of sun and clouds with westerlies, a little brisk at times. Late rain or showers in King Country and around Central Plateau.
Highs: 17-22

Eastern North Island
A mix of sun and cloud or sunny with high cloud further north. Dry for the most part but a few showers likely in Wairarapa lately – where it will also be windier. Nor’Westers for the most part. Warmest through inland Gisborne and Northern Hawke’s Bay.
Highs: 18-25

Wellington
Cloudy or becoming cloudy again with nor’westers turning southerly later and a few showers or some brief rain moving in.
High: 16 or 17

Marlborough & Nelson
Becoming cloudy with some rain or showers developing later, especially on the Nelson side. W to NW winds. Cooler inland.
Highs: 15 – 21

Canterbury
Clouds increasing with late showers or spits of rain. West to north west winds turning cooler west to sou’west later bringing that chance of wetter weather. Cooler in the mountains across the day with thicker cloud cover.
Highs: 13 – 23

West Coast
Rain moving up the coast with some isolated heavy falls further south. A chance of isolated thunder as cooler air moves in. Westerlies.
Highs: 14 or 15

As always to drill down deeper – or to get more clarity on the above maps for where you are locally, see the HOURLY forecasts at both WeatherWatch.co.nz and RuralWeather.co.nz!