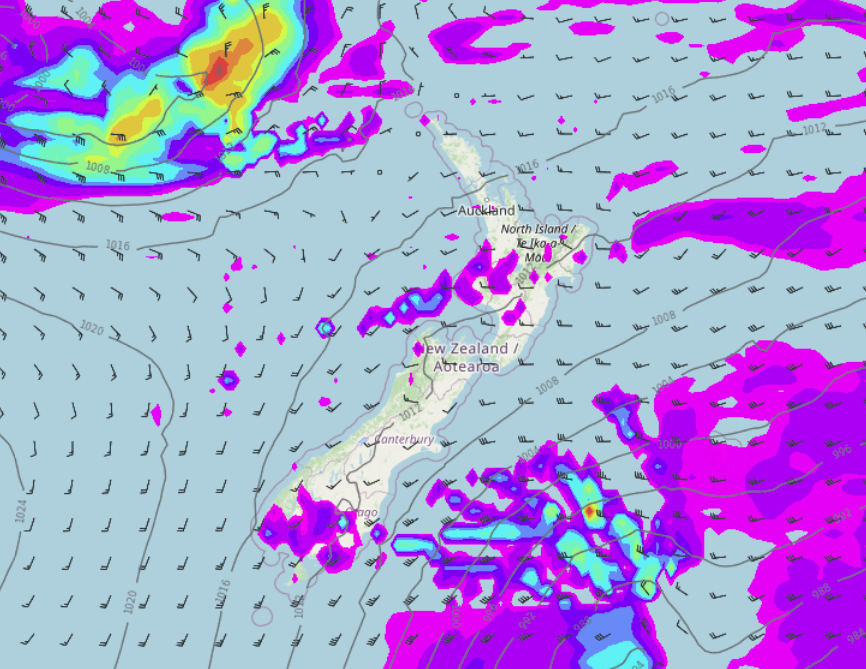 A southwesterly airflow flows over New Zealand for one last time today, it eases tomorrow as a ridge of high pressure moves in and an easterly airflow develops about the upper North Island.

Some western areas and the far south of the South Island sees showers today but a shower or two does make into some eastern regions for a time. There will be snow flurries about the far south and Banks Peninsula overnight (levels below) but accumulations are fairly minimal if not non existent.

Northland, Auckland, Waikato & Bay Of Plenty
Cloudy areas with the odd shower, Bay Of Plenty has a mix of sun and cloud although a shower or two may spread into western parts of the region at times from the west. Southwesterly winds change southeast overnight.
Highs: 13-15

Eastern North Island
A few showers possible, mainly morning then again later in the day and overnight. But there is the risk of a shower at other times. Expect sunny spells otherwise. Morning southwesterlies tend westerly by midday then freshening from the southwest again at night.
Highs: 10-13

Wellington
There may be a morning shower or two, afternoon sunny spells then in the evening southerlies freshen with increasing cloud and a few further showers.
High: 10

Canterbury
Any morning cloud clears then sunny, in the evening showers push back into coastal areas and parts of North Canterbury as westerlies tend fresh southwest, strong about the coast. A few overnight snow flurries to 300m for Banks Peninsula. Expect very frosty conditions morning and night about inland Mid and South Canterbury especially.
Highs: 8-10

West Coast
Mostly sunny, north of about Greymouth expect showers which clear away in the evening. Southwesterly winds tend southeast later in the day.
Highs: 9-11

Southland & Otago
Occasional showers with gusty westerlies tending southwest late morning (strong about the coast), a few snow flurries to 400m, perhaps 300m from late afternoon in spots. Central and northern parts of Otago may have a dry morning with sunny spells then showers in the afternoon.
Highs: 6-8