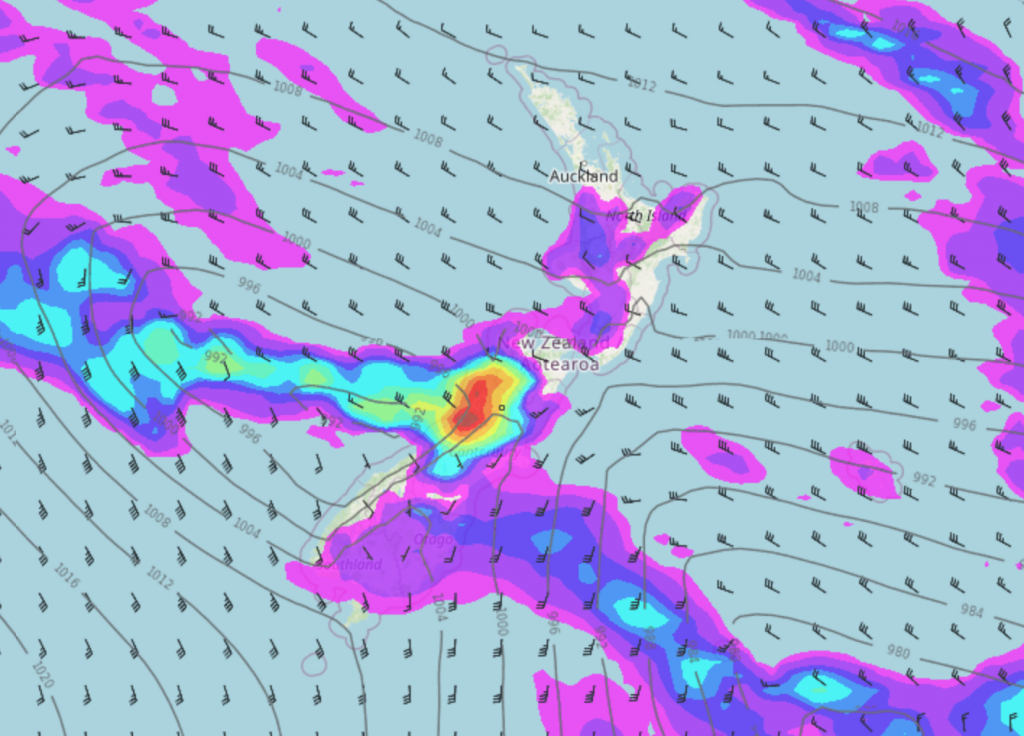 Northland, Auckland, Waikato & Bay Of Plenty
Sunny spells and a few showers, more so in the morning. Showers a little more frequent during the day for Waikato. Northwesterly winds.
Highs: 17-18

Western North Island (including Central North Island)
Showers or some rain with breezy northwesterlies, precipitation may pick up later in the evening as winds change to the south.
Highs: 11-16

Marlborough & Nelson
Sunny spells, the odd shower or spit possible for Nelson and the Sounds. Later in the evening or overnight rain moves in. Strong northwesterlies ease then changing to the south later in the day. Snow overnight to 600m for Marlborough.
Highs: 13-17

Canterbury
Dry to start with high cloud, rain pushes northwards late morning as southwesterlies strengthen, easing to showers later in the evening. Showers thin out overnight. Snow may get as low as 300m at night. Snow will be heavier in the high country.
Highs: 5-16

West Coast
Rain, occasional heavy falls possible. Fiordland dries out in the afternoon. Rain eases in the evening for all to a few spits as northerly winds change southeast.
Highs: 11-15

Southland & Otago
Morning rain, easing to showers by midday, showers clear during the evening. Snow to 600m in the morning lowers to 300m by evening then clears. Fresh southerly winds, strong about coastal Otago.
Highs: 7-10

It feels like winter only lasted a couple of weeks in Auckland. One moment it was below 5°C and now the temperature averages 15°C consecutively merely a few days later. Is there a scientific reason why Auckland’s weather pattern is so bi polar and unstable? Cheers.

Hi Caleb – it’s all about “know your air flow!”. In the current set up, the way the high and low pressure systems are positioned means northern NZ has an airflow from Fiji and the northern Tasman Sea area, while the lower South Island has a much colder airflow moving in. In Auckland the frosts we sometimes get come from high pressure parked in the Tasman Sea and sending us polar southerlies. When the high is EAST of NZ we can get the opposite – airflows from well north of us. NZ is like a traffic island and we sometimes we have a warm northerly, other times a cold southerly.
Cheers
WW