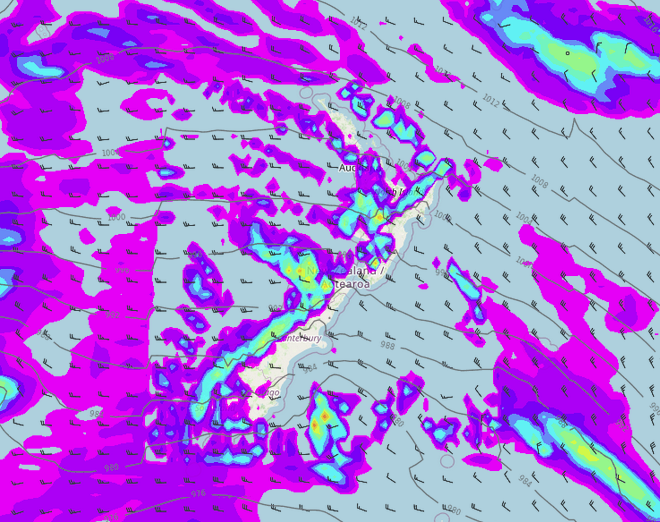 A westerly airflow lies over New Zealand today with fronts pushing in from the Tasman Sea, some cold air today with some snow possibly getting as low as 200m about the far south.

Northland, Auckland, Waikato & Bay Of Plenty
Showers, there may be an isolated heavy fall and rumble of thunder around midday, mainly Auckland northwards. Sun may break through at times. Gusty northwesterlies ease in the evening.
Highs: 16-18

Western North Island (including Central North Island)
Rain, perhaps the chance of a morning thunderstorm then easing to showers in the afternoon. Gusty northwesterlies strong about the coast, easing later on.
Highs: 9-15

Eastern North Island
Mostly sunny with gusty northwesterlies, some rain for Wairarapa though spilling over from the west with strong northwesterlies.
Highs: 15-19

Wellington
Morning rain eases to showers, a few sunny spells may break through at times from afternoon. Strong to gale northwesterly winds.
High: 14

Canterbury
Mostly sunny, as one gets into the high country closer to the Main Divide expect some rain passing over from the west with snow to 700m. Some morning rain for the Kaikoura area clears away. Gusty northwesterlies,
Highs: 6-15

West Coast
Rain, possible heavy at times with some hail, there may be some thunder too mainly morning. Gusty west to northwesterly winds. Snow lowers to between 300 and 200m for Fiordland in the afternoon, lowering to 600m further north.
Highs: 5-13