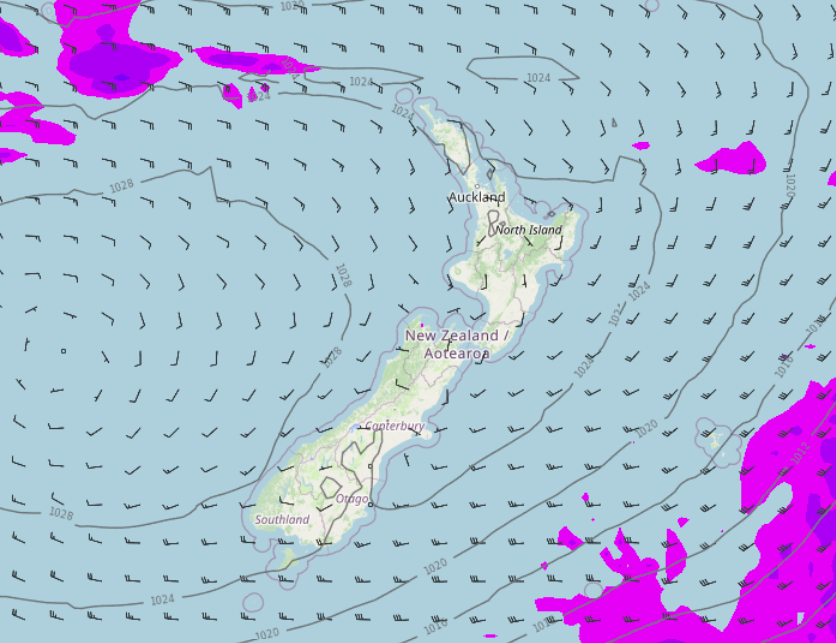 High pressure bulges over New Zealand today spreading out from a large high centre in the Tasman Sea. The weather today for most regions is nice and settled, there may be some cloud about though and it will be a chilly start for some especially inland.

Northland, Auckland, Waikato & Bay Of Plenty
Any morning cloud clears Waikato and Bay Of Plenty then sunny. Further north expect some cloud then breaking to sunny spells, chance of a shower on the western coastal fringe then drying out in the afternoon. Southerly quarter winds tending to the east in the afternoon.
Highs: 20-23

Eastern North Island
A mix of sun and cloud, chance of a shower about the coastal fringe around midday. Southerly winds, dying out in the evening.
Highs: 17-20

Wellington
Cloud breaks to a mostly sunny afternoon, southerlies tend to the north in the evening.
Highs: 16-19

Canterbury
A sunny day, morning cloud across the Canterbury Plains breaks away. Light winds tend east to northeast in the afternoon.
Highs: 16-19

West Coast
Mostly sunny, there may be some coastal cloud at times north of about Haast. Light winds.
Highs: 16-19

Southland & Otago
A mix of sun and cloud for Southland, westerly winds freshen after midday. Sunny for Otago with a cold start inland, light winds.
Highs: 16-19