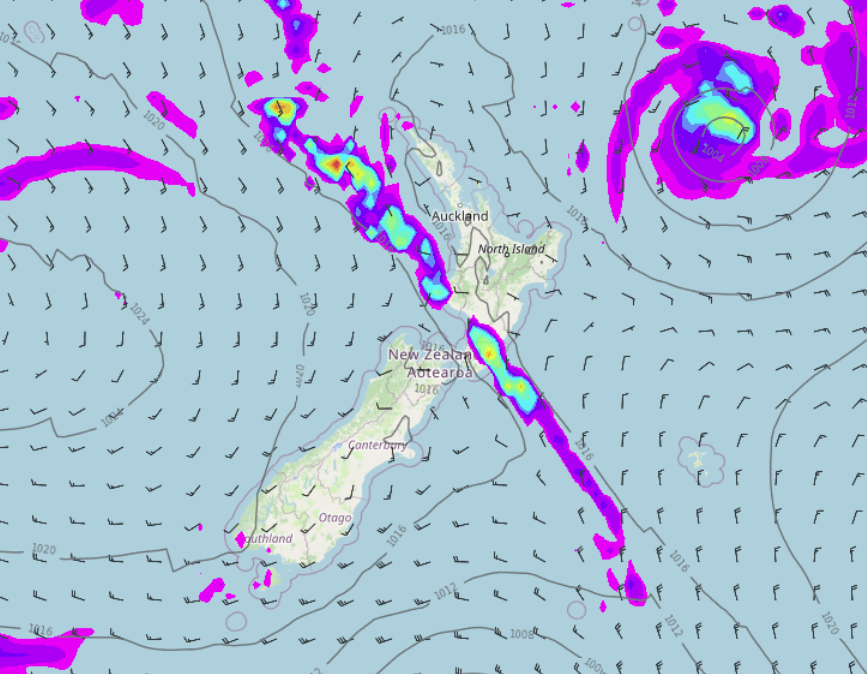 A front pushes over the North Island today gradually bringing a few showers for western regions and eventually later on in the east, meanwhile the South Island sees showers clear in the west and south.

Western North Island (including Central North Island)
Northerlies change southwest in the morning for Taranaki bringing a few showers, elsewhere expect morning northerlies then dying away and staying mainly dry, still the risk of a shower though. Cloud thickens up in the morning for most. Winds push through from the southeast in the evening and cloud starts to break away.
Highs: 21-24

Eastern North Island
Nice and sunny, cloud moves over Wairarapa in the morning though then thickening further north later in the afternoon or evening with the odd shower too as light winds change to the south.
Highs: 23-25

Wellington
A few spits or showers then some sun breaks through in the afternoon as northerlies change to the south.
Highs: 21-23

Marlborough & Nelson
A few morning spits or showers then clearing and sun breaking through, northerlies change to the southeast late afternoon for Marlborough. Cloud thickens for southern Marlborough in the evening with drizzle. Nelson has morning southwesterlies tend to the north in the afternoon.
Highs: 24-26

Canterbury
Mostly sunny with morning high cloud clearing away. Northwesterlies change to the southeast in the afternoon and cloud starts to thicken, some drizzle possible in the evening mainly inland.
Highs: 23-25

Southland & Otago
Showers about Southland and the Catlins clear around midday then sunny spells increase from afternoon, blustery west to southwesterly winds die out in the evening. Otago has morning cloud but is mainly dry, sun from afternoon also.
Highs: 17-23