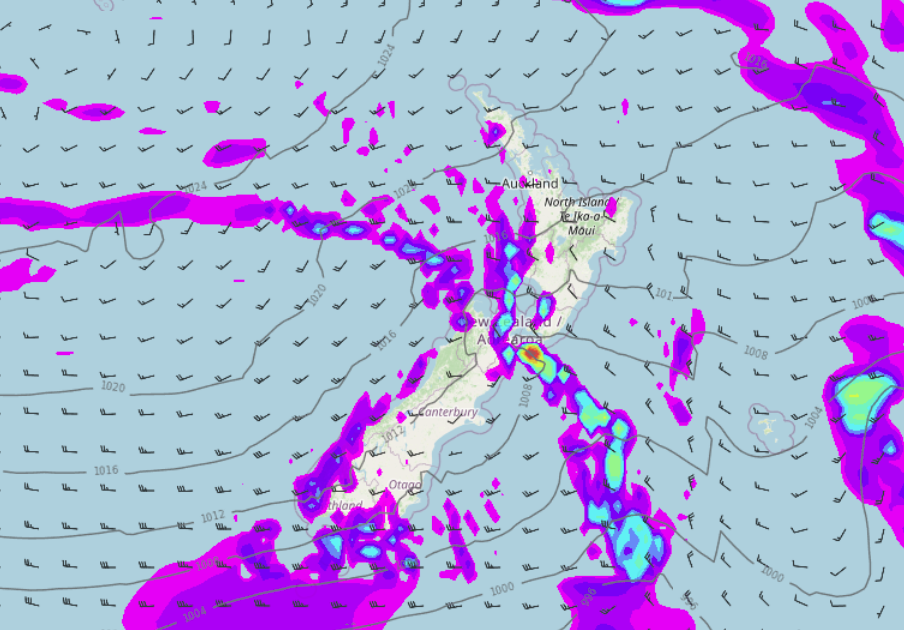 Northland, Auckland, Waikato & Bay Of Plenty
Some cloud, the odd shower in the west. Showers more widespread for a time in the evening as westerlies change gusty southwest. Showers clear overnight.
Highs: 15-16

Western North Island (including Central North Island)
Increasing cloud, the odd shower. Showers pick up late afternoon or evening for a time as breezy northwesterlies change southwest. Showers clear at night. Snow flurries may lower to 700m for a brief time before clearing at night.
Highs: 10-15

Eastern North Island
Mostly sunny with northwesterly winds, late afternoon showers move through Wairarapa with a southwest change, showers push through Hawkes Bay and Gisborne in the evening. Showers clear from the south at night.
Highs: 15-18

Canterbury
Dry at first with some sun then late morning southwesterlies rush through bringing showers, perhaps an isolated heavy fall with a rumble of thunder and some hail. There may be some snow down to 600m for a brief time. Showers ease in the afternoon, clearing evening.
Highs: 12-15

West Coast
Morning heavy rain then easing to showers in the afternoon as gusty northwesterlies change southwest. Conditions may dry out in the afternoon north of Haast through to about Hokitika. Some snow may lower to about 700 or 600m in the ranges.
Highs: 10-13