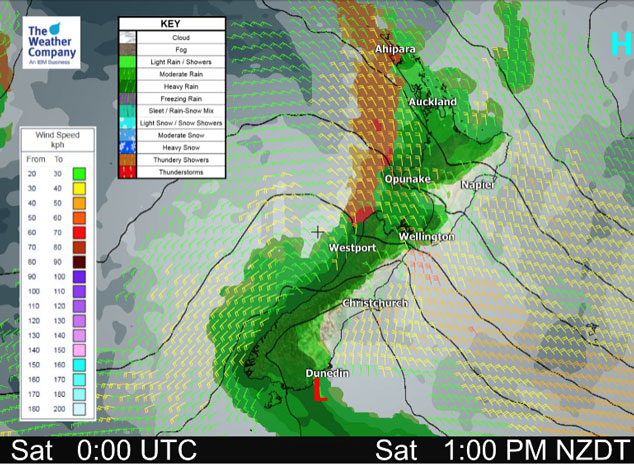 A cold front passes over New Zealand today moving in from the west, winds strong from the northwest ahead of this front then changing southwest in behind.

Northland, Auckland, Waikato & Bay Of Plenty
Dry at first then showers move in during the morning, chance of a heavy fall late afternoon / early evening about Waikato and Bay Of Plenty as northerlies tend northwest. Showers becoming few and far between later in the evening.
Highs: 18-22

Western North Island (including Central North Island)
Mostly cloudy with showers, clearing later in the evening. The odd heavy fall for Taranaki across into the Lake Taupo area, perhaps even a thunderstorm in the afternoon, easing evening. Northwesterlies freshening up during the morning.
Highs: 17-21

Eastern North Island
High cloud, some sun may break through at times. The odd spots of rain spreads into Wairarapa from the west, clearing evening. North to northwesterly winds.
Highs: 21-24

Wellington
Rain at times, clearing in the evening. North to northwesterly winds strengthen rising to gale in the afternoon, easing overnight.
High: 18

Marlborough & Nelson
Rain, clearing away mid to late afternoon about coastal Marlborough then sun breaks through. Rain eases to showers for Nelson and the Sounds in the evening then clearing away. Gusty northwesterly winds, strong to gale fore about the Sounds, easing overnight.
Highs: 19-23

West Coast
Rain with heavy falls, thunderstorms north of about Greymouth from afternoon as northerlies change gusty westerly. Rain eases to showers in the evening.
Highs: 16-18

Southland & Otago
Rain develops first thing in the morning for Southland, moving into Otago during the afternoon with southwesterlies, there may be thunderstorms about Otago with the change. A few areas of scattered rain possible about Central Otago before the southwest change moves in. Rain is persistent at times, clearing from the south during the evening.
Highs: 13-22