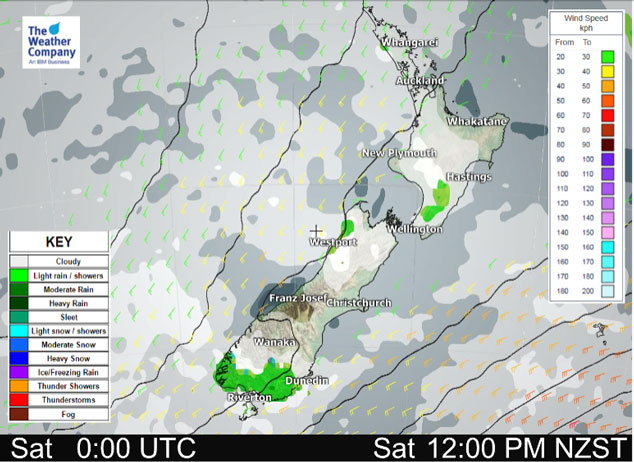 Northland, Auckland, Waikato & Bay Of Plenty
Cloudy areas, especially from afternoon. A shower or two spreads in from the west during the morning, expect many dry areas also. Dry about Bay Of Plenty all day with mostly sunny weather, cloud thickens up in the evening with late showers / drizzle. Southwesterly winds.
Highs: 16-17

Eastern North Island
Mostly sunny, cloud builds in the morning for Wairarapa then a few showers develop there in the afternoon, clearing at night. Hawkes Bay and Gisborne sees cloud increase from afternoon then there may be a shower or drizzle patch by evening. South to southeasterly winds develop before midday.
Highs: 14-15

Marlborough & Nelson
Cloudy areas develop in the morning with southeasterly winds, afternoon northerlies for Nelson. There may be a drizzle patch or shower from afternoon then clearing at night.
Highs: 14-16

Canterbury
Cloudy areas develop in the morning with light southerlies, chance of a drizzle patch or shower about inland areas from afternoon, clearing at night.
Highs: 12-15