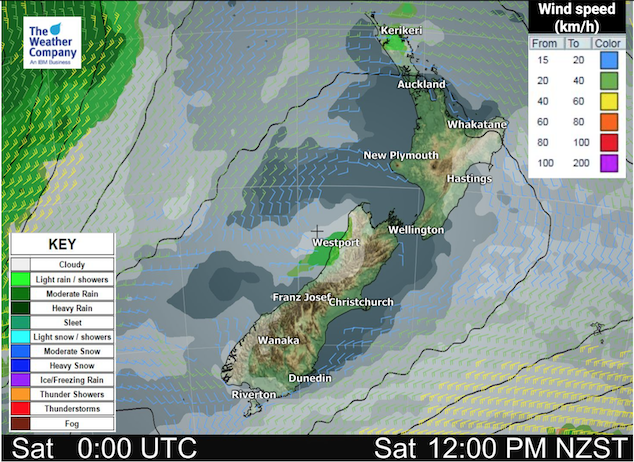 An anticyclone brings mainly settled weather to New Zealand today, a southeasterly airflow moving around this high brings a few showers to the far north and this morning about Gisborne.

Northland, Auckland, Waikato & Bay Of Plenty
Sunny for most, some cloud for Northland (especially in the east) northern Auckland and Coromandel brings a few showers then clearing in the evening. Light southeasterly winds, winds may be a little breezy about eastern Northland in the morning then easing.
Highs: 13-16

West Coast
Morning showers Greymouth northwards then some sun breaks through from afternoon. Further south conditions are mostly sunny, some cloud at times for Fiordland. Light winds tend southwest in the afternoon.
Highs: 11-13

Southland & Otago
Sunny weather, some cloud about coastal fringe areas may move a little further on land in the afternoon about Southland and the Catlins. Otago Peninsula northwards sees some cloud later in the day. Light winds tend to the west or southwest.
Highs: 9-10