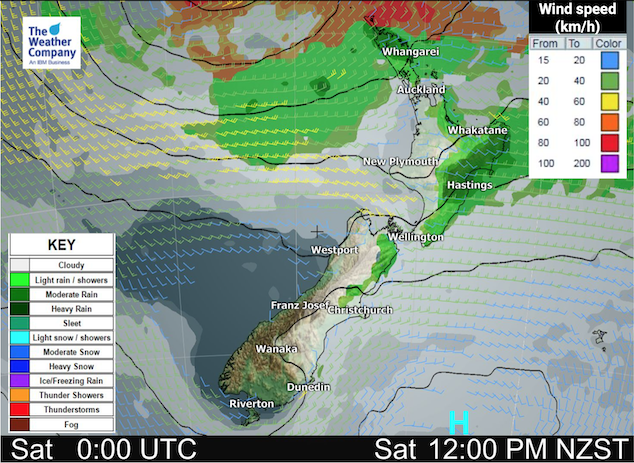 Easterlies continue to flow over New Zealand today, rain or showers about Northland and the east coast of the North Island. Drizzle for the eastern South Island. Stunning sunny skies for the West Coast and Southland.

Eastern North Island
Cloudy with patchy rain or drizzle, rain may be heavy at times north of about Gisborne especially in the ranges. East to southeasterly winds.
Highs: 13-15

Canterbury
Mostly cloudy, the odd drizzle patch (mainly Banks Peninsula northwards) then clearing at night. East to northeast winds. Over into the Mackenzie Country skies are clearer with frosts to start, perhaps some fog also in the morning then clearing.
Highs: 6-11

West Coast
Mostly sunny, there may be a touch of high cloud. Light winds.
Highs: 13-15

Southland & Otago
A frosty sunny day for Southland and Central Otago with light winds, perhaps some morning fog then clearing. Coastal Otago has a mix of sun and cloud with northeasterly winds.
Highs: 6-10

Northland barely got a mention in the forecast and they were inundated with rain last night – the low has stalled over Whangarei and there is severe flooding. What is your update for the next 24hours in the Northland region?

We have mentioned rain in the forecast for Northland, heavy falls at times today.

Admittedly for Friday’s forecast though we we’re off the mark in terms of how heavy the rain became for Northland, certainly much heavier in areas than we expected. (In saying that a once in 500 year rainfall can be a bit hard to pinpoint the day before-hand)