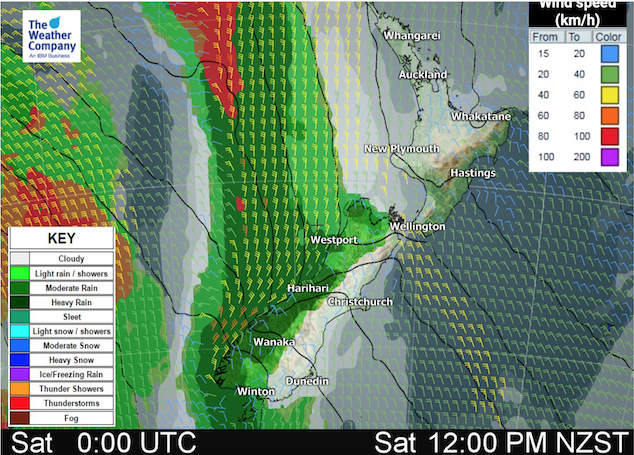 A northerly airflow lies over New Zealand today, a front pushes northwards over the South Island reaching the lower North Island around dawn on Sunday.

Western North Island (including Central North Island)
Sunny spells, cloud thickens up late afternoon / evening. There may be a shower or drizzle patch about Taranaki / Kapiti, overnight some rain moves into these areas. North to northwesterly winds.
Highs: 19-21

Wellington
Mostly cloudy, may be a spit later in the day. Strong north to northwesterly winds.
Highs: 17-18

Marlborough & Nelson
Cloudy about Nelson with the odd light shower, rain develops in the evening then spreading into Marlborough overnight. Rain becomes heavy overnight for Nelson. Some sun for Marlborough in the morning before clouding over. North to northwesterly winds increase.
Highs: 18-21

Canterbury
Mostly sunny with increasing high cloud, heavy rain moves into the high country in the evening then a few scattered areas of rain spread to the coast overnight. North to northeasterly winds pick up from afternoon.
Highs: 19-21