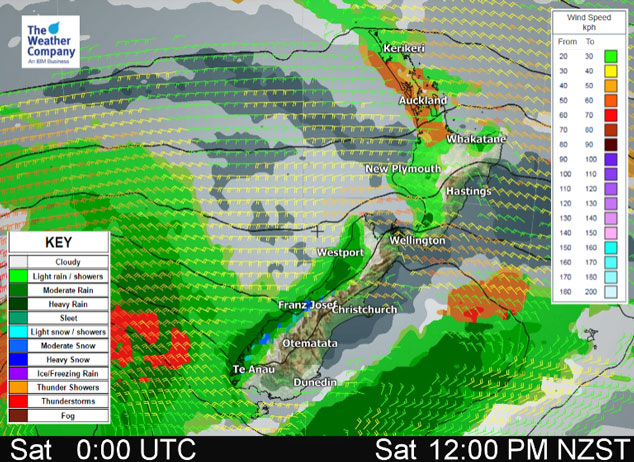 A low pressure system in the south Tasman Sea flings a front over New Zealand this morning moving in a west to east fashion.

Northland, Auckland, Waikato & Bay Of Plenty
Showers, some slow moving and heavy with isolated thunder, main risk easing around midday as northwesterlies tend westerly. Some spots may be completely dry from afternoon with mostly sunny conditions like Bay Of Plenty.
Highs: 19-22

Western North Island (including Central North Island)
Showers, some heavy, sun breaks through at times. West to northwesterly winds freshen up in the afternoon.
Highs: 16-19

Wellington
A few morning showers then sunny areas develop, northwesterlies strengthen in the afternoon. Cloud thickens up again overnight with a few spits moving in.
High: 17-18

West Coast
Morning rain with heavy falls (thunderstorms possible for North Westland) then easing to showers by midday, northerlies change fresh westerly. Later in the evening rain picks up again with a chance of thunderstorms this time about South Westland.
Highs: 13-15

Southland & Otago
Morning rain then sun breaks through in the afternoon, especially for Otago, the odd spit may continue about Southland. Later in the evening showers pick up again for Southland and Central Otago. Northeasterlies change northwest after midday.
Highs: 14-16