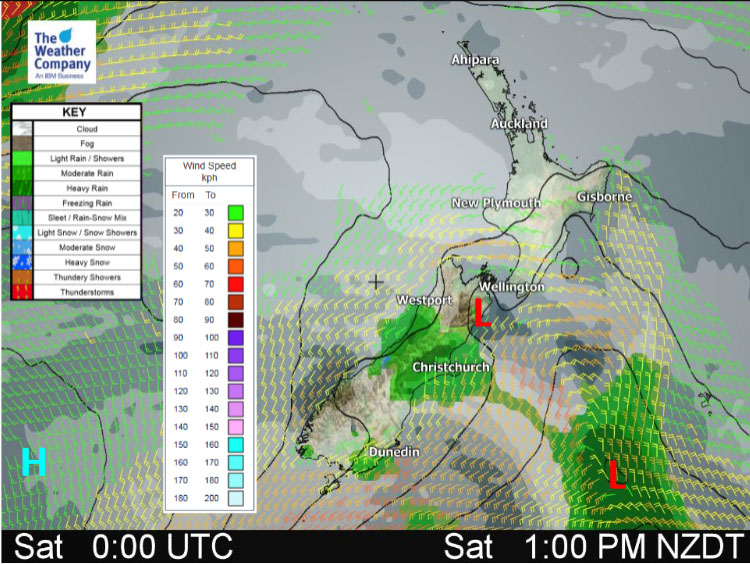 A front pushes northwards over the South Island during Saturday, reaching the lower North Island in the evening.

Morning cloud breaks away then mostly sunny, some cloud may return here and there during the day. Light variable winds.
Highs: 22-27 Western North Island (including Central North Island)
Cloudier in the south of these regions with west to southeasterly winds.
Highs: 19-24 Eastern North Island
Early cloud then sunny, light winds then afternoon sea breezes from the east.
Highs: 24-28 Wellington
Often cloudy with winds mainly from the south to south east but become variable for some.
High: 21 Marlborough & Nelson
A mix of sun and cloud with light winds in Nelson. Some cloud about Marlborough as light winds tend southeast.
Highs: 22-24 West Coast
Cloudy areas and the odd shower, especially coastal. Mainly dry by evening. Southwesterly winds.
Highs: 16-20

Canterbury
Cooler with showers developing and south to southeast winds.
High: 18 Southland & Otago
A period of morning rain, even pushing into Otago, then breaking to showers and dry spells. Much cooler winds in coastal areas from the south west.
Highs: 11-16 WeatherWatch.co.nz