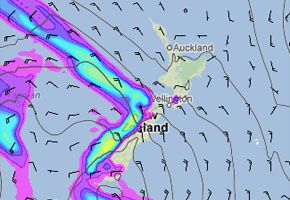 While most of the North Island is looking to have a good day the lower western portion from Taranaki through to Wellington is likely to see cloudy areas and the risk of the odd shower later in the day as it catches the northwesterly airflow mentioned above.

Eastern regions are the place to be says WeatherWatch.co.nz with Canterbury right through to Gisborne in line to get temperatures of 23 to 25 degrees in the afternoon.

For the three main centres the weather tomorrow is expected as follows:

Auckland is likely to see moderate northwesterly breezes with sunny areas and some cloud, a high of 20 degrees.

Wellington will see mostly cloudy skies developing in the morning with northerly winds strengthening during the day becoming strong in the afternoon, a few showers are possible at night. A high of 16 degrees expected.

Christchurch will see sunny weather with high cloud, there may be a few brief spits of rain mid afternoon but it is likely to remain dry. Northwesterly breezes developing in the morning then in the evening easing and tending southwest with some cloud. A high of 24 expected.