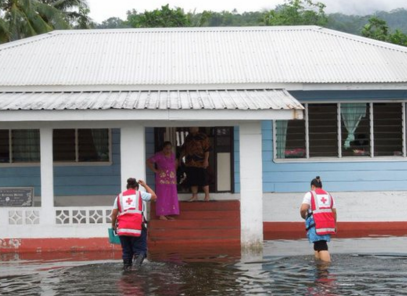 Four families in Savaii and one in Upolu had to evacuate to higher ground when Cyclone Amos struck at the weekend, according to the government.

More powerlines down following tropical cyclone Amos.Damage to powerlines following Cyclone Amos. Photo: 350 Pacific
In a statement, it said there were no reported casualties.

An initial overview by the Ministry of Natural Resources and Environment confirmed minimal damage and loss to crops such as banana and breadfruit.

It said about 70 percent of the country experienced power outages as a result of the cyclone, but full power has since been restored.

The Ministry of Health has also advised the public to be mindful of water consumption, sanitation and hygiene.

Cyclone Amos struck on Saturday night much weaker than originally feared, and caused only minor damage, including flooding and landslides.