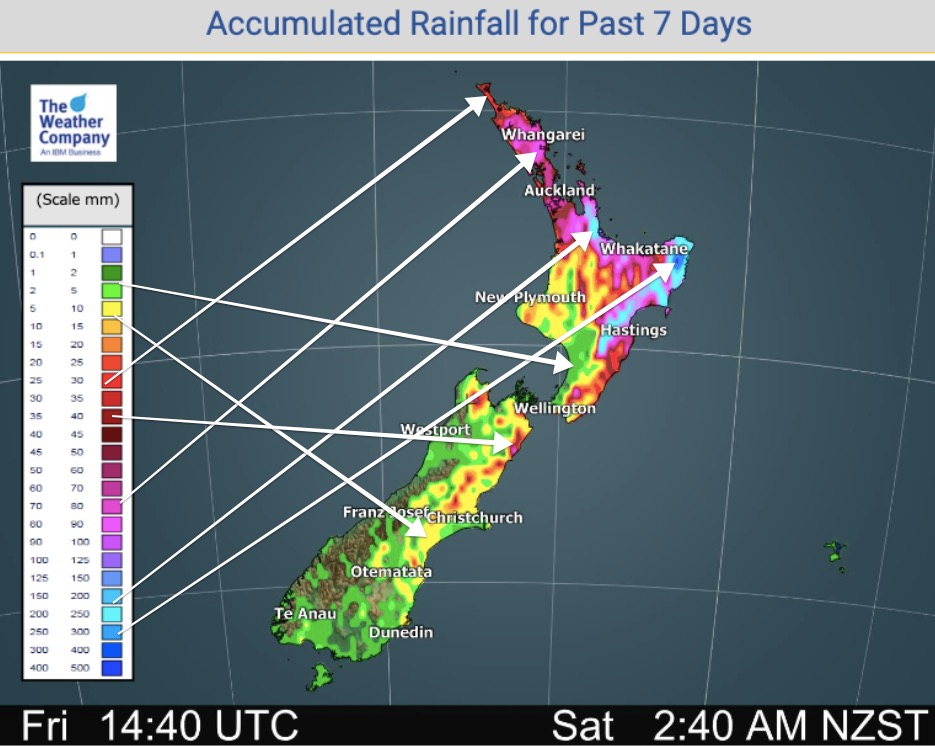 More heavy rain has fallen across the upper North Island as a low in the north Tasman Sea works with a high pressure system east of NZ to pull down moisture-rich sub-tropical rain. The heavy downpours have twice moved over northern NZ bringing thunderstorms too in recent days.

As WeatherWatch.co.nz exclusively forecast with IBM in May, June was going to be the game changing month with a return to normal rainfall, even above normal rainfall in parts of the dry North Island. We also forecast that surface soil moisture droughts would end.

Last night more downpours, slow moving, drenched Northland, Auckland, Waikato and Bay of Plenty. Today showers are more isolated but will still be heavy. Thunderstorms are possible, but likely to be much more isolated.

WeatherWatch.co.nz continues to forecast optimism for the rural community and for Auckland’s water storage dams – but we’re not totally out of the woods. The rainfall deficit over the past 18 months is significant, even if surface soil moisture levels are now fixed much more rain is still needed in the months ahead – and that super long range forecast is not yet locked in.

It was September last year that WeatherWatch.co.nz first raised the alarm about northern NZ catching the same dry weather pattern from Australia that had caused droughts there.

This pattern has broken apart in the past few months. “The biggest game changer in recent months is that the high pressure systems have not been anchored/stuck over Australia and stretching out over NZ blocking all our rainmakers. Instead, the highs have been quite independent, with many tracking south and east of NZ recently helping to actually encourage sub-tropical rain events in northern New Zealand” says WeatherWatch.co.nz head forecaster Philip Duncan.

During this same time Australia has also had rain relief – but in recent weeks high pressure has started to build there again – and will expand over Australia in July in quite a dominant way. Worth monitoring over the weeks and months ahead.

But for New Zealand the rain isn’t over just yet. More northern rain and showers are coming in the days ahead, while another week from now, around Monday July 6, there may be another brief burst of heavy sub-tropical fuelled rain for northern NZ followed by more showers and west to south west winds kicking back in.

Once this has passed, another enormous block of high pressure will likely stretch out from Australia in to week two of July, perhaps bringing a settled period of weather to NZ and mild conditions in the east of both islands as westerlies settle in for a time.

Pasture growth is likely to be quite positive in the upper North Island due to the milder than normal weather, the recent and upcoming rain and the sunnier dry spells also forecast in July. “Generally speaking, the weather over the past week or two has been very positive for the New Zealand economy and the next week or two ahead look equally as positive as Mother Nature continues to try balancing the weather books” says Mr Duncan.

WeatherWatch.co.nz will issue our July outlook, with IBM, on Tuesday June 30th.

North Waikato has had a decent soaking in the past few days, even so that there are large puddles in some paddocks and mud, so I don’t think we need rain here for a little while again if anything we need some drier weather again.