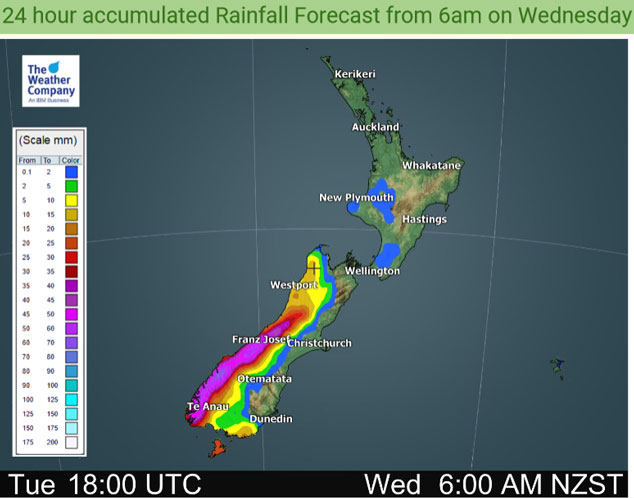 Showers for the western North Island clear this morning, mainly dry elsewhere in the north although Northland could see a shower or two in the west this afternoon and Hawkes Bay / Gisborne may see an early shower clearing this morning. Expect rain or showers for the West Coast of the South Island and Southland / Central Otago, mainly dry for Otago Peninsula up through to Nelson in the east.

Expect the odd shower during the day south of about Auckland in the west on Thursday, dry elsewhere for the North Island. The South Island sees heavy rain in the west, a cold southwest change moves into Southland around late morning bringing rain, pushing into Otago during the afternoon and reaching Canterbury in the evening. Nelson / Marlborough sees rain later in the evening and overnight respectively.

A cold front pushes over the North Island on Friday bringing rain, this will ease in the afternoon then clearing evening. Morning rain clears the upper South Island although a shower or two may linger for the West Coast. Expect rain or showers about Southland and South Westland, Otago is drier but a shower or two moves in for a time during the afternoon with the passage of a front.