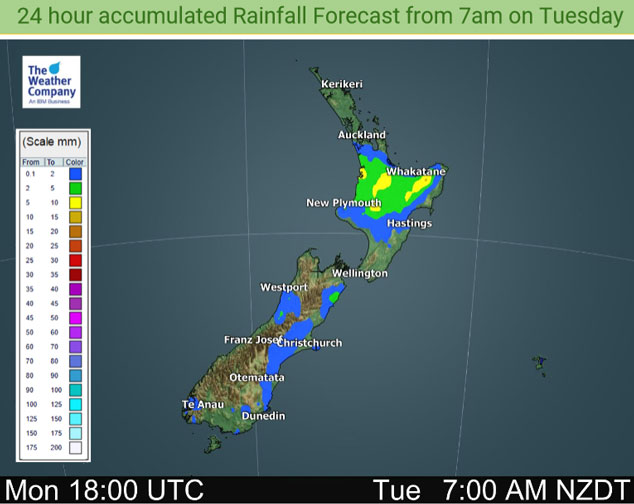 A cold front lies over the North Island today and will weaken, expect some rain or showers in the west mostly clearing in the evening. A shower or two could remain overnight about Waikato. Note that Northland and Auckland is mainly dry in the map below. There could be a clearing morning shower about northern Wairarapa / Hawkes Bay then late afternoon / evening a few showers or drizzle patches return. Mainly dry for the South Island generally speaking, a few morning showers about Southland and along the West Coast clear. There may be an isolated shower or drizzle patch in the east from afternoon also.

Chance of an isolated shower in the afternoon for the upper North Island on Wednesday, isolated showers between Waikato and the ranges of Hawkes Bay / Gisborne may become heavy in spots then easing evening. It must be stressed these are quite isolated in nature so not everyone will get showers or they may be short in duration. Dry for the South Island, chance of some early morning drizzle in the east then clearing.

Dry for most of the country on Thursday, an isolated shower or two may crop up again in the afternoon between Northland and through / across to the ranges of Hawkes Bay / Gisborne, mainly away from coastal spots. Showers clear for most in the evening but about Northland and Taranaki showers may continue through the night.