RainWatch – Some rain / showers for the North Island today 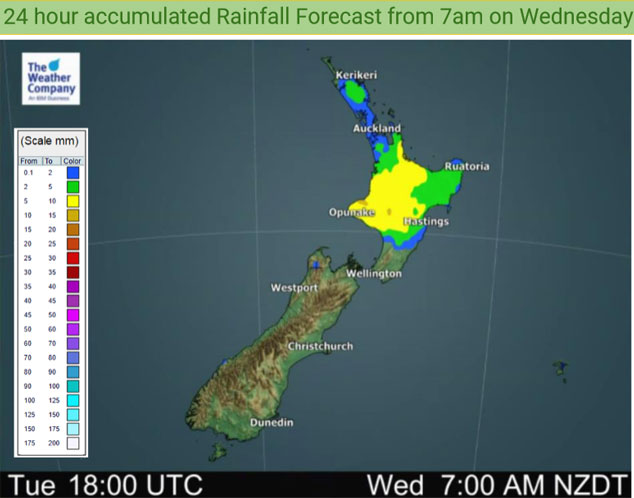 Looking dry for the South Island today, expect some rain for the North Island south of about Waikato and north of Palmerston North. Rain will ease to showers from afternoon for most. Waikato through to Northland has the risk of a few isolated showers this afternoon then clearing away in the evening for most however perhaps hanging about Northland overnight.

Moving into Thursday some rain develops in the morning for the West Coast, the odd scattered fall spreads eastwards in the afternoon about Canterbury through to Marlborough, clearing evening. A spit or two possible about the far south of the South Island later in the day.

Taranaki across to Bay Of Plenty sees the odd shower during the day, Waikato through to Northland sees the odd shower also however in the morning expect large dry areas. A few showers creep southwards into Wellington and Wairarapa late afternoon / evening also. Expect mainly dry weather for Hawkes Bay and Gisborne, chance of an isolated shower in the ranges late afternoon.

A northerly airflow lies over the country on Friday, mainly dry in the east. Some rain for the West Coast of the South Island with heavy falls, mostly Greymouth southwards. Chance of an isolated spit or shower about Southland / Otago in the afternoon, clearing evening.