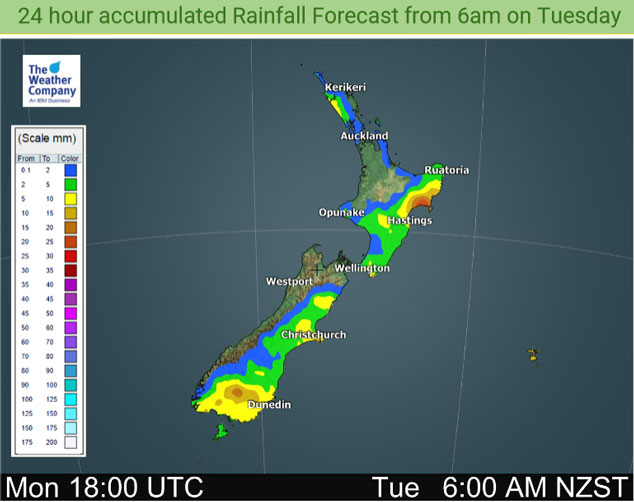 As a low pressure system crosses over to the eastern side of the North Island on Tuesday rain builds in the east in a southerly airflow. Northland (especially in the west) also sees some rain although this will ease to a few showers by evening. Showers for Canterbury ease in the morning becoming quite coastal, just the odd coastal shower elsewhere in the east then from afternoon a cold front pushes into Southland reaching Canterbury at night.

The West Coast of the South Island has another sunny day.

Showery conditions for the eastern side of New Zealand on Wednesday, the odd shower moves into northern Auckland and Northland (especially in the west) as the flow tilts a little more to the southwest for those areas.

Snow is likely on most of New Zealand’s main mountain ranges during the next 3 days. The burst moving through from Tuesday afternoon about the lower South Island and into Canterbury at night brings a lowering of the snow level. Canterbury, especially in the north will be most affected by this with snow likely to 400m north of about the Rakaia River on Wednesday, perhaps even 300m at times in heavier flurries, these conditions will gradually ease / clear on Thursday.

A trip to Hanmer on Tuesday afternoon / evening might be worth while with a snowy day on the cards on Wednesday, perfect for the hot pools.

The Central North Island and ranges for the eastern North Island don’t escape with snow falling on Wednesday and into Thursday as indicated on the map below. It will not be as extensive as South Island falls but the Central Plateau / Desert Road and Napier / Taupo highway will be affected so keep up to date with road conditions on Wed / Thu.