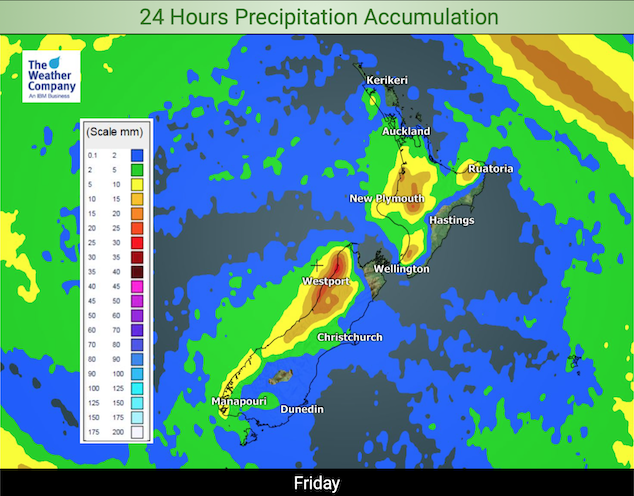 Expect showers in the west today and mainly dry weather out east in a northwesterly airflow, a southwest change pushes through Canterbury today bringing a few showers. Showers for the West Coast north of the Glaciers and about the western North Island may be heavy at times with thunder then easing in the evening.

Saturday is quite dry for a majority of the country but there may be the odd brief shower or drizzle patch about in the west and for the eastern South Island up to about Banks Peninsula. Showers push into Northland from the west during the afternoon reaching Auckland in the evening.

Becoming quite wet for the western North Island on Sunday, areas of rain or showers may be heavy at times with thunder. The east coast stays mainly dry but a shower or two could spread from the west afternoon onwards. A few showers or drizzle patches for the upper / eastern South Island, rain moves into western / northern areas in the evening.

Rain or showers for most western regions on Monday including Southland and Otago, the east coast of the South Island is mainly dry meanwhile showers may spread from the west into the eastern North Island at times. The flow tends more southwest on Tuesday next week with showers for most regions, it may start to clear up for the western South Island however.