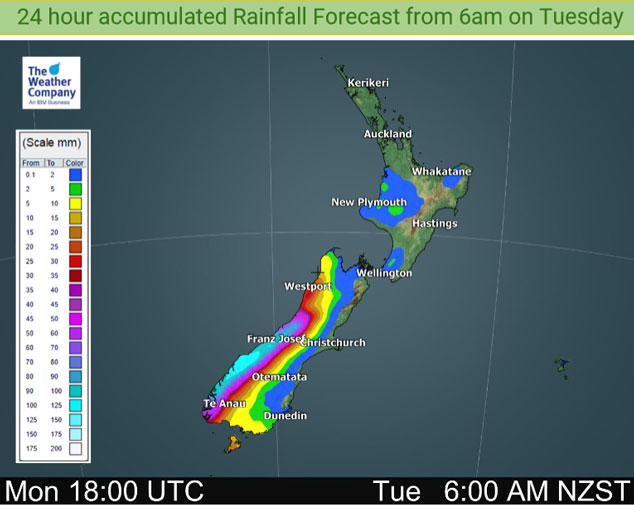 Rain moves into Fiordland this morning then gradually pushes northwards during the day with heavy falls, reaching into North Westland overnight. Later this evening rain pushes into Southland then a few scattered falls reach Otago overnight.

The odd shower for the western North Island on Wednesday (Waikato through to Wellington), turning to rain in the afternoon although not about Waikato till evening, this rain reaches elsewhere about the upper North Island overnight. Western East Cape catches a shower or two in a northwesterly airflow.

Heavy rain with thunderstorms eases to showers in the morning for the West Coast, morning spots of rain clear the lower South Island then from afternoon showers moves into Southland then Otago. These showers may be heavy with thunderstorms and hail then easing in the evening.

Rain or showers for much of the western North Island on Thursday including Bay Of Plenty, there may be a few heavy falls about the Waikato in the afternoon. Wellington stays largely dry all day. The east coast is mostly dry also however scattered falls spread from the west into Hawkes Bay and Gisborne in the afternoon then clearing in the evening.

Showers for the West Coast of the South Island are heavy at times with thunderstorms and hail, mainly dry in the east however once again during the afternoon showers develop for Southland and Otago, some heavy with thunderstorms and hail then clearing in the evening. An isolated shower may appear about South Canterbury and perhaps Banks Peninsula in the afternoon otherwise staying mainly dry.