RainWatch – Heavy rain for the western South Island, dry in the east 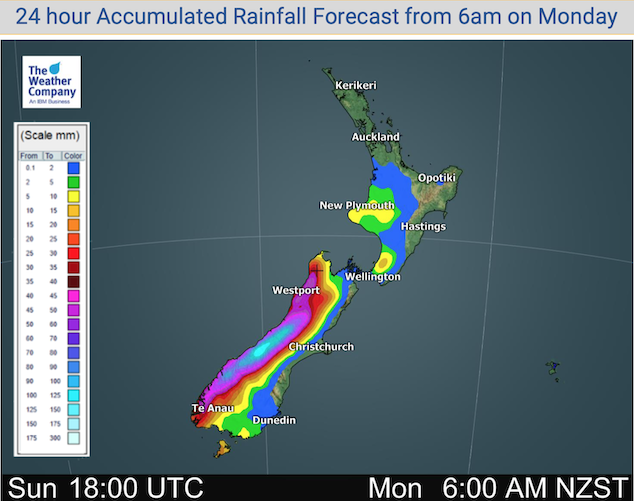 Expect the odd shower for the western North Island today, mainly south of about Waikato, dry in the east. The West Coast of the South Island has rain, heavy falls for South Westland moving into North Westland around midday. Mainly dry in the east although expect rain further inland about the high country / main divide, Southland sees a few showers late afternoon / evening.

Showers for the western North Island on Tuesday, picking up at times as fronts move in from the west. Mainly dry for the east coast although Wairarapa may see a few afternoon showers spread from the west.

Heavy rain with hail / thunderstorms for the West Coast of the South Island, similar weather spreads into Southland and Otago during the afternoon and possibly up to Banks Peninsula nearer the coast late afternoon. Canterbury and Marlborough sees rain in the high country and this may spread to the coast at times. Expect rain about Nelson from midday then easing evening. Expect snow in the western and southern South Island to lower to 500m.

Expect the odd shower Taranaki southwards for the western North Island on Wednesday, mainly dry elsewhere in the north. Expect rain or showers for the West Coast of the South Island and Southland / Otago, mainly dry for Canterbury and Marlborough. Nelson sees a shower or two spread from the west at times.