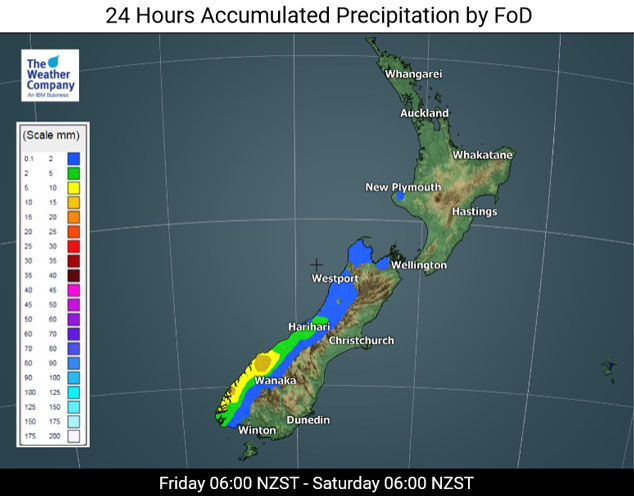 Conditions are quite dry on Friday around New Zealand, the map below does show showers appearing in the west but these are more towards dawn on Saturday as a front moves closer from the Tasman Sea.

Heavy rain pushes northwards along the West Coast of the South Island during Saturday reaching the likes of Taranaki by dawn on Sunday. Shower activity for the North Island is mostly light and patchy during Saturday itself with some areas remaining quite dry. The east coast definitely has a dry day in a northwest airflow.

The western North Island’s turn for some heavy rain is on Sunday. There is a chance there may be a few broken sections in this front with lesser amounts of precipitation moving through, this may well ring true for the likes of Auckland. Not to say there won’t be any rain but perhaps a little less then the likes of Taranaki, Central North Island and Bay Of Plenty as shown below. The east coast of the South Island starts to get its turn on Monday as the flow tends to the south then the east coast of the North Island on Tuesday.