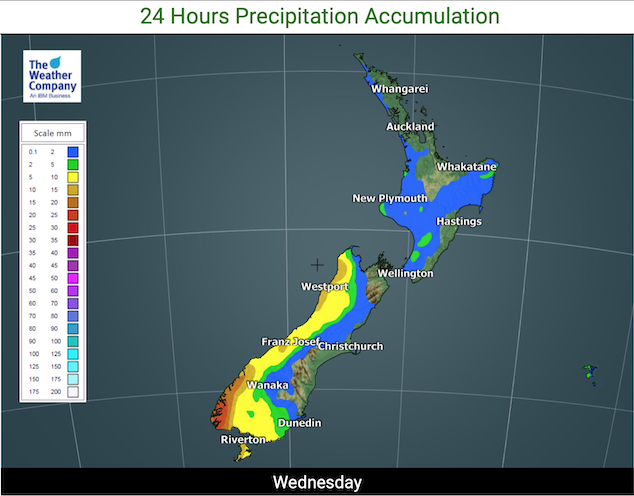 Showers for the western North Island ease during today with only the odd shower remaining about western fringes this evening. Showers in the east clear this afternoon. Early rain about Nelson / Marlborough clears then mainly dry, a shower or two could continue about Tasman / Nelson at times pushing in from the WSW. Showers develop this afternoon for the West Coast, rain moves into Fiordland this afternoon spreading into North Westland later in the evening. The odd shower about coastal Southland, rain spread northwards through Southland and Otago late afternoon / evening with some snow to 500m then easing overnight.

Expect showers for the western North Island on Thursday, becoming heavy with some thunder / hail in the afternoon then clearing evening. The eastern North Island sees showers push through Wairarapa in the morning then further north during the afternoon, once again a chance of heavy falls / thunder and hail as these showers move through on a southwest change.

Showers for Nelson / Marlborough, perhaps an isolated heavy fall with some thunder / hail about the ranges during the afternoon then clearing evening. Cloudy areas about Southland through to Canterbury with the odd shower, clearing evening. Early rain eases to showers on the West Coast north of about Greymouth, mostly clearing by evening.

Bit of a spell for the North Island on Friday, the odd shower continues at times out west in a westerly quarter airflow. Showers for the West Coast of the South Island, turning to rain about South Westland from afternoon and becoming heavy.

‘Blasts into Southland’? What a headline!