RainWatch – A wet week ahead 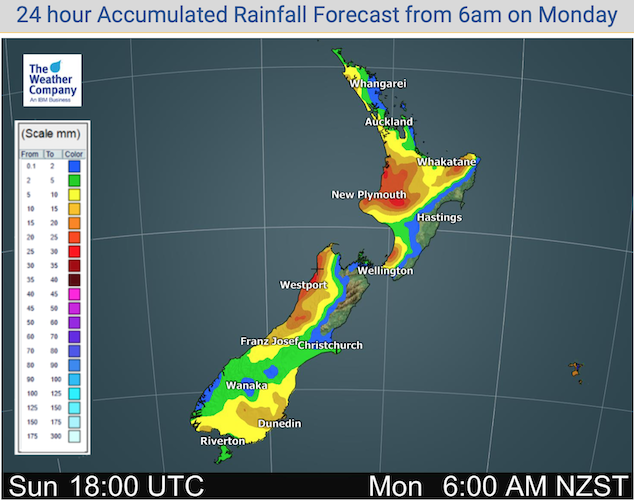 This week is fairly unsettled with plenty of shower or rain activity about. Today expect showers for western regions of the North Island, heavy at times with possible thunder / hail. Mainly dry in the east as can be seen in the map below however a few early showers are possible then clearing.

Morning rain for the West Coast of the South Island eases to showers, morning rain about Nelson / Marlborough then clearing away. Rain about Canterbury becomes restricted to Banks Peninsula southwards this afternoon. Showers for Otago turning to rain this afternoon near the coast especially North Otago and finally the odd shower sneaks into Southland from this afternoon.

All North Island regions can expect showers on Tuesday, heavy in the morning for western regions north of Taranaki then gradually easing from afternoon as southwesterlies move in. Rain or showers about Southland / Otago spread northwards during the day with cold southwesterlies. Snow lowers on the ranges to 300m about the lower South Island by afternoon then lowering to 400m for Marlborough overnight.

Some morning rain can be expected in the south / east of the North Island on Wednesday with some snow to 500 or possibly 400m then clearing in the afternoon. Occasional showers for most other North Island regions. Most shower activity clears the South Island early in the morning.