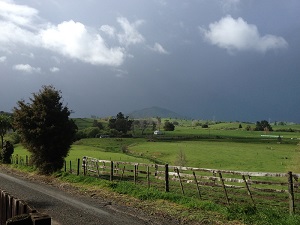 A few showers are moving across the upper and western North Island today.

As we go throughout the afternoon and evening, it looks like rain chances will be focused on the central North Island where a few moderate showers are possible.  A few brief heavy falls are possible about the western part of the island where there is a small risk for thunderstorms.

On the South Island, there is a chance for showers along the West Coat and the deep south.

Tomorrow, more rain is expected for the North Island with most of the island running a risk for at least a few light showers.  A few moderate showers are possible early in the day about the eastern Bay of Plenty.

The South Island will also likely see showers tomorrow.  Some moderate to heavy falls are possible in the morning about the top of the island and along the West Coast.  The showers should be confined to the West Coast during the afternoon and evening.