Rains continue through – #WeatherRisks for Friday 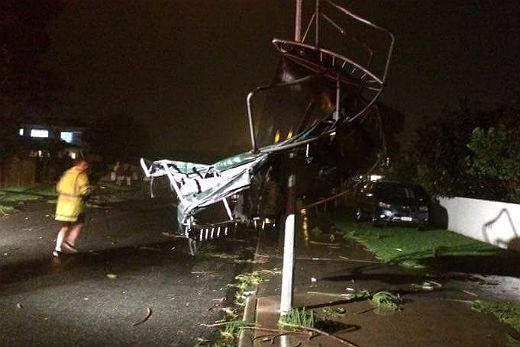 A complex low pressure system still sits over the country, with the second of three rain bands set to move over New Zealand today.
Winds are coming in from the northwest over the North Island, while the South Island will be influenced by southerlies for most of the day.

A front will clear East Cape early in the morning, having brought some heavy rain to the area.
Next in line we have a front which pushes onto the west of the North Island around midday, which could bring heavy falls with a risk of thunderstorms anywhere from Northland down through to about Taranaki – excluding the East Coast.
Thunderstorms are generally possible until evening, while conditions are there for the risk of an isolated small tornado through today, as we saw yesterday.

Part of this front moves onto the lower North Island during the afternoon, which could bring further heavy rain from late afternoon to an already deluged area – for parts of Wanganui, Palmerston North and Kapiti, to name a few. Wellington may just miss out if this heavy rain band sticks north of the city, but something to watch anyway.
Later this evening, strong to gale southerly winds will move into Wellington.

For the South Island, south to southwesterly winds will become strong along the east coast this afternoon, while gales are possible for exposed coastal areas – especially Banks Peninsula.

A front also lies across Tasman and the Marlborough Sounds this afternoon, which may bring some heavy rain – before pushing away in the evening.