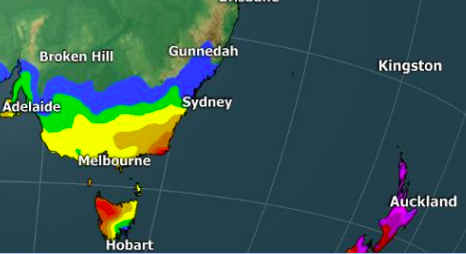 Our high-res IBM rainfall and snow maps paint a picture of pockets of heavy rain across parts of NZ and Australia over the days ahead. Low pressure from Australia is heading to NZ this weekend and will fall apart there – meanwhile another low brushes the southern coastline of Australia.

The tropical north of Australia remains remarkably dry for now – as does a large portion of Aussie thanks to high pressure.

Dry Hawke’s Bay in the eastern North Island does have some chances of rain in the days head – even small amounts will be welcome by the drought impacted region.

The main area of concern may be the heavier rain around the upper South Island, where the ranges of Nelson and between Nelson and Marlborough may have over 100mm in two or three days. While this total doesn’t usually lead to serious flooding, it may well lead to more slips in these already slip prone regions.

For NZ’s most accurate and hyper-local rainfall totals, trust WeatherWatch.co.nz and RuralWeather.co.nz for hourly and daily totals – powered by IBM.