Home > News > Rain persists in the South Island as Git... 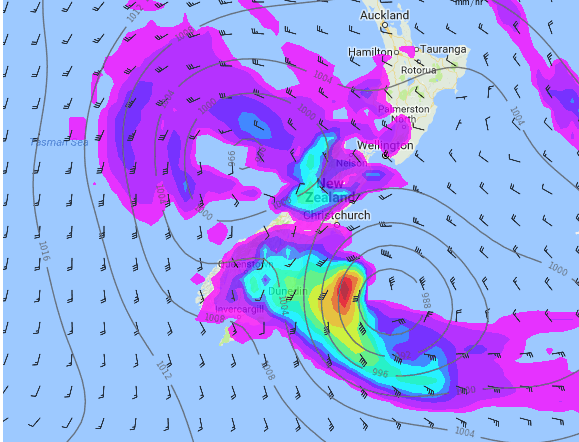 While the cyclone mostly missed the top half of the North Island (where half of NZ’s population is) the force of the storm was evident where it first came in: windwise in Taranaki and rainwise in the upper South Island.

Much of the energy was dispersed through Cook Strait after that which helped shoulder damaging winds and torrential rain too. The Southern Alps helped rapidly tear the system apart also.

Now that Gita has split in two we’re seeing the two lows ‘dance’ around each other in a bit of a yin and yang style.

With the main low to the east of the South Island drifting further southwards than initially forecast it has spared Christchurch ongoing heavy rain but has instead pushed that rain-band into Dunedin and Otago. Dunedin still doesn’t have a rain radar so we cannot see clearly what is happening right now but international satellite imagery and forecast rain maps certainly show rain continuing much of today. 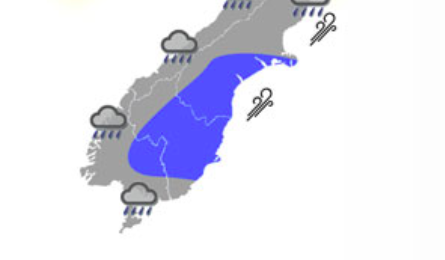 With Dunedin only just recovering from a major flood event after Cyclone Fehi authorities in the city will likely be on high alert today watching developments as this low to the east drifts closer to the city and deepens a little further. Rain should be light to moderate around Otago and the southern half of Canterbury but some heavy falls are expected as the low pushes southwards and even a little closer to Otago for a time. Later today the low will drift slowly out into the South Pacific Ocean and away from the South Island.

Meanwhile the secondary low, which is weaker and smaller, still has a lot of tropical energy leftover in it and will dump more heavy downpours on the West Coast. In fact as of 7:45am there were some significant heavy areas of rain moving in from the west, mostly south of Hokitika.

Tonight and overnight tonight this secondary low will slide back up and into Cook Strait/the lower North Island delivering some heavy but localised rain.

The moisture rich air dragged down with Gita has interacted with a cold southerly too – this has created for some impressive snowfall in the lower South Island mountains around Queenstown and Wanaka.

By the end of Thursday Gita’s remnants will be gone. A high pressure system comes in behind it for the weekend. 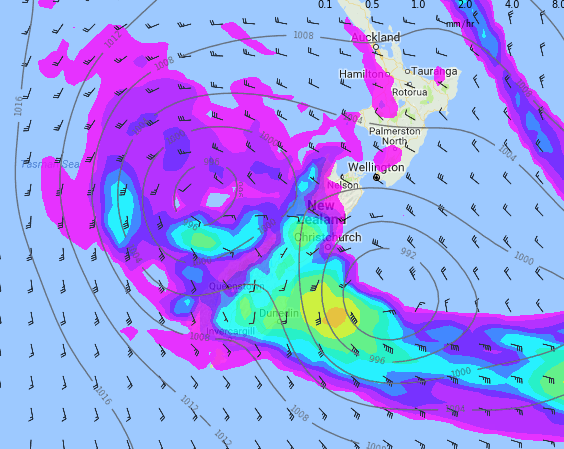 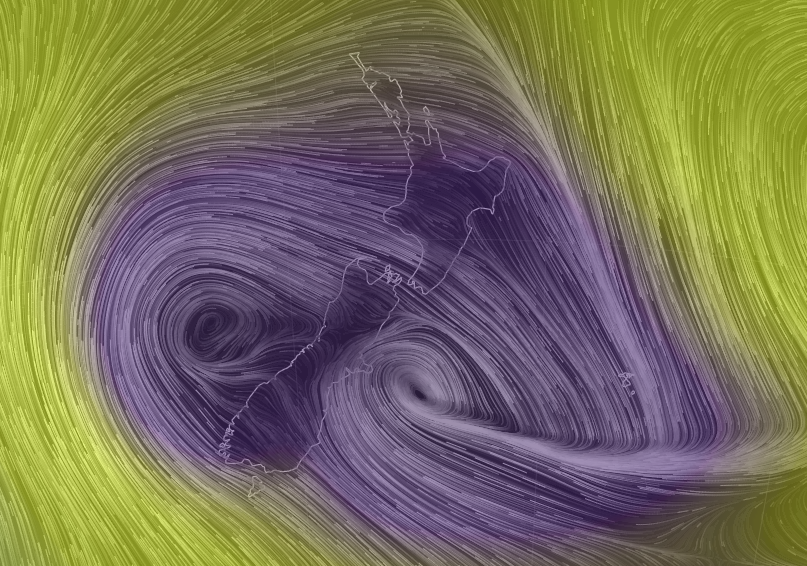 Loved the way you clarified how it missed the top half of the North Island where half of the country lives – it highlighted nicely that although it happened and you acknowledge the existence of the South Island, it isn’t overly important because it didn’t affect Auckland much.

We mentioned that because some people in the upper North Island were saying a lot on social media that the storm was a “fizzer” – the point of that comment was to highlight that Gita was a serious storm and if it had hit the upper North Island it would have been far more damaging and affected far more people. It had nothing at all with being Auckland-centric it was to do with educating people about the seriousness of cyclones and how where they make landfall matters.